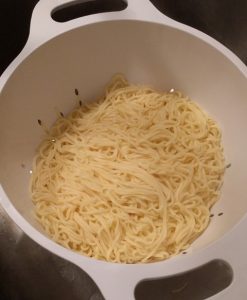 A little over a year ago, I made the decision to curb my carb intake significantly. Yes, it was a choice. I was so influenced by the books Grain Brain and Wheat Belly that I decided it was best to cut out breads and grain-based products. It was tough for the first month or two. I like bread, and I missed it.

Fast forward a year later, and I’ve gotten over it. I don’t miss bread. I don’t miss grains either, with one exception. Pasta was one meal I just couldn’t give up. Spaghetti dinners are a staple around our house. With our homemade sauce, I just couldn’t let go. I had to find some way, any way, that I could rationalize and enjoy a good bowl of noodles drenched in marinara and freshly grated Parmesan cheese.

How did I rationalize my decision to eat pasta? We make it ourselves. Granted, it’s still eating wheat, but I choose the ingredients.

The best part of homemade pasta is how simple the recipe is. There are only three ingredients – flour, eggs, and salt. My favorite recipe for pasta is from the kitchn site. I’ve transcribed a simplified version of the recipe below, but you can get the complete recipe here.

While you can use any type of flour, including all-purpose, we’ve settled on using 1 cup of Semola and 1 cup of doppio zero, or “00”, flour. It gives the flour a nice texture and is easy to work with. It also gives the pasta a lighter taste, which I’ll talk about more later. 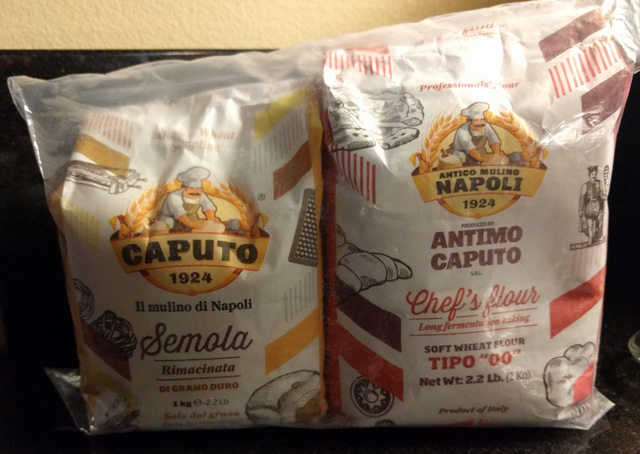 For the salt, any type will do. For the record, we’ve been using sea salt. Quite honestly, it’s such a small amount that it really doesn’t matter much.

Tools of the trade 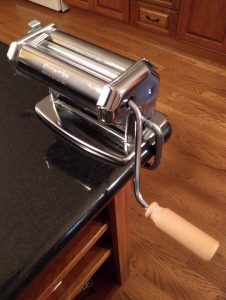 The beauty of making pasta is that the tools required are very simple. You can get the job done with following equipment:

The only item that you may not have lying around is the pasta maker. There are plenty of pasta makers, but a good friend of mine of Italian decent who makes their own pasta insisted that I buy an Italian made pasta maker. He recommended the Imperia, which you can buy from Amazon (see listing here). Typically, it should run you less than $50. We’ve been using ours for almost a year now and haven’t had any problems. It has worked flawlessly. 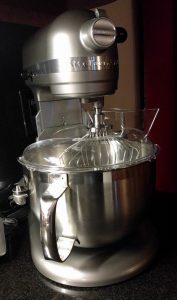 While you don’t need a stand-up mixer for making pasta, it does make the job a lot easier. We picked up the Kitchen Aid at Costco, where we got a pretty smoking deal on the 8-quart size. If you’re going to get serious and plan on making your own pasta regularly, get the mixer. It will save you a ton of time and effort. For the occasional pasta-making experience, using the fork to mix and your muscle to knead will work fine.

For mixing, there are two methods. The first is to combine the flour and salt into a large mixing bowl, well out the center, and then drop the eggs into the center. Using a fork, you can scramble the eggs, and then slowly start mixing in the flour from around the edges. The mixture will get stiffer as you mix in the flour.

Once all the flour has been pulled into the center, I like to get my hands dirty and work the mixture into a ball. From there, you’ll want to spend 4-5 minutes kneading the dough. Once you’ve work out the air pockets/bubbles and have an elastic ball of dough, you can set the ball in the mixing bowl, cover with a towel, and let stand for 45 minutes or so. 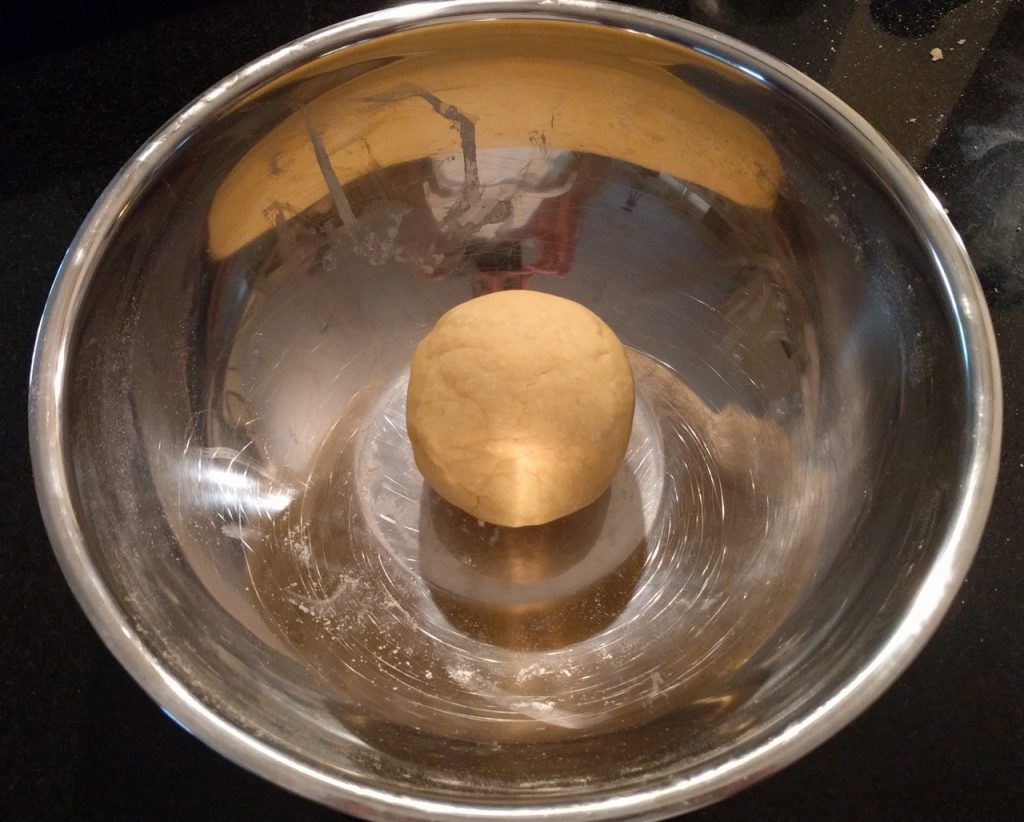 After the dough has rested, I quarter it, and then roll out the pasta sheets using a pasta roller. Once I have the four sheets, I’ll usually cut these in half, and then run them through a pasta cutter to make the desired style of noodles.

The second method is to use the stand-up mixer. After combing the flour and salt, well out the center and drop the eggs into the well. I usually scramble the eggs, and then put the mixer on a mid-level setting of 4 and let ‘er rip. If you don’t stir fast enough, the dough doesn’t come together, and if you stir too fast, the dough doesn’t mix well.

Once the dough is mixed and has come together, you switch out the paddle attachments for the kneading hook. We set the mixer on the lowest setting,  which is ‘stir’ in our case, and let the kneading hook do its thing for 4-5 minutes. Then we knead it lightly, roll into a ball, and follow the rest of the instructions for rolling and cutting the pasta above. 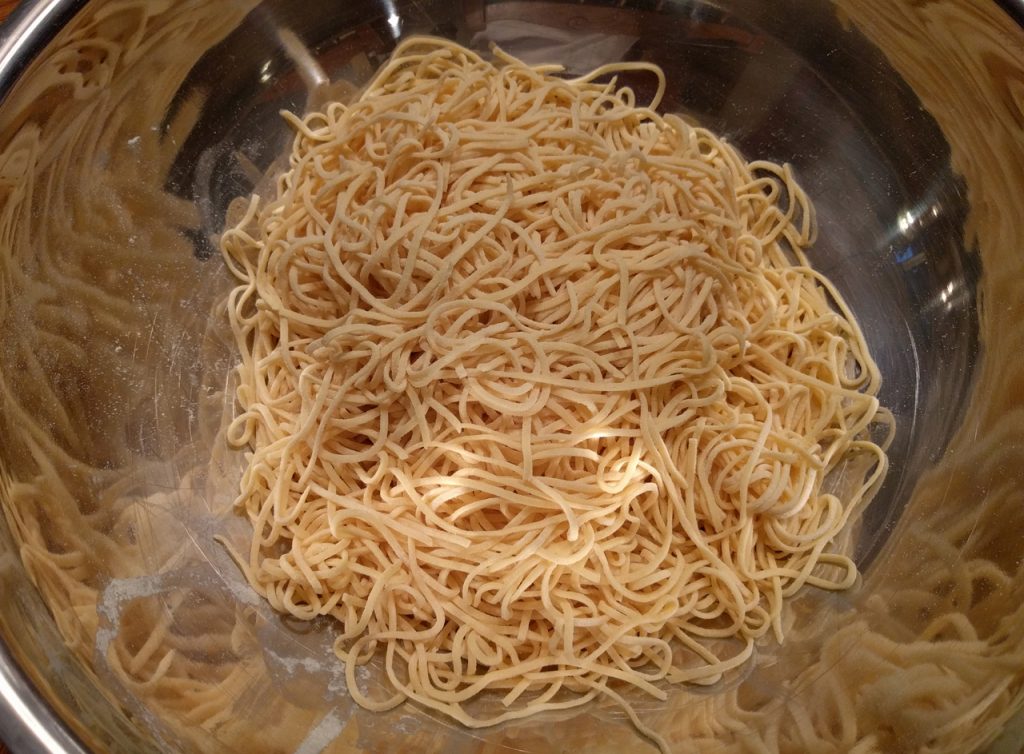 Once the noodles are cut, it’s time for the fun part – cooking and eating!

The beauty of homemade pasta is that it doesn’t need to be cooked as long as “regular” pasta. After bringing a pot of water to a boil, the noodles are cooked for approximately 4 minutes, or until the desired tenderness. Then, just like normal pasta, drain and serve. The finished product looks just like you would expect. 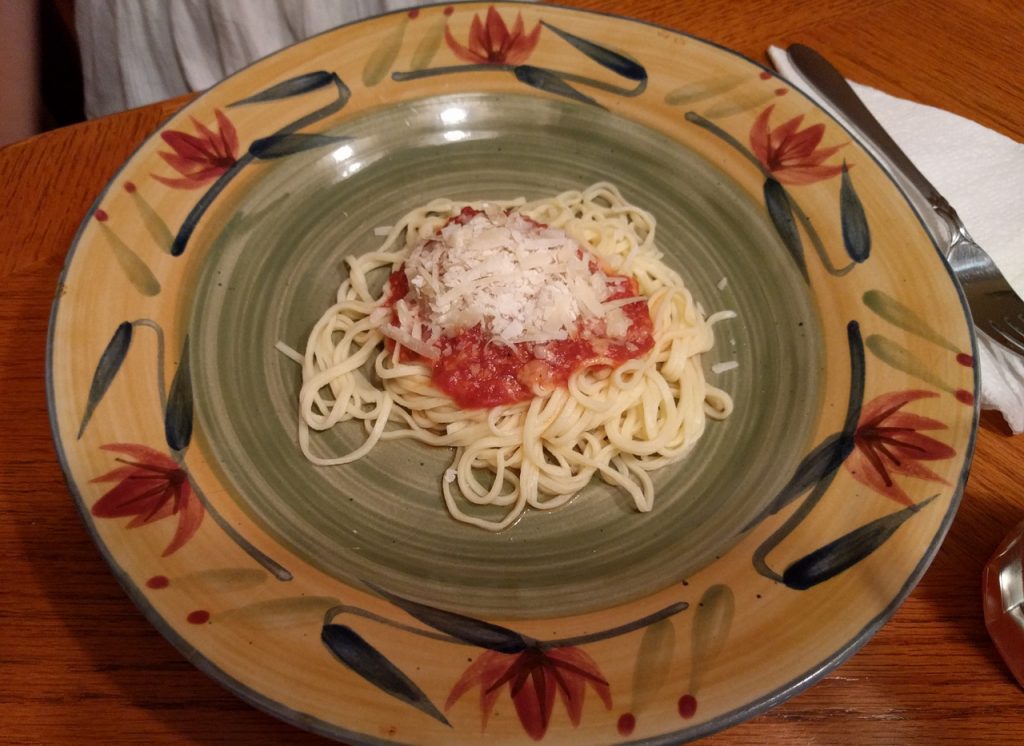 The best part, it tastes better than it looks. For whatever reason, and maybe it’s psychological, the spaghetti tastes better than store bought and is lighter on the stomach. What do I mean by lighter? You can eat a full plate and it doesn’t leave you with that same over-stuffed feeling. Instead you feel content and satisfied.