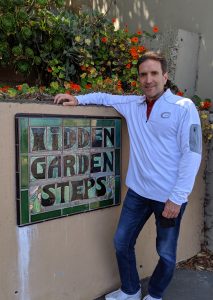 One of the best ways to explore a city, in my opinion, is to hit the pavement and walk around it. Even better if you’re able to discover interesting landmarks and do some sightseeing along the way. Fortunately, when you travel to San Francisco, there is no shortage of great walks around the city and the surrounding communities.

For this hike, we’re going to head out to the Sunset District / Golden Gate Heights area on the west side of the San Francisco peninsula. This is a relatively short hike of just over a mile where you will encounter two landmarks that are off the beaten path – the 16th Avenue Tiled Steps and Hidden Garden Steps. The steps are amazing feats of artistry with intricate tile work creating a beautiful mosaic from the bottom to the top of the stairways. In between the two stops, we’re going to climb up to the lookout in Grandview Park. It’s a bit of a climb to get to the top, but it’s worth it on a clear day. You’ll get a nearly 360-degree view that spans the San Francisco city skyline, San Francisco Bay, Golden Gate, Lands End, and the Pacific Ocean. Let’s get started.

As mentioned, the hike comes out to about 1.1 miles total. Google says it can be done in about 30 minutes, but that’s without stopping for photo-ops, of which there are many. Depending on how long you dawdle at each location, you may want to reserve up to 2 hours for the overall trip. Also be forewarned that there is quite a bit of elevation change in the hike, which includes a fair amount of stair climbing up and down. I’d categorize it as a fairly easy hike if you’re OK with the elevation changes, or a moderate hike if you struggle with climbing (lots of) steps.

Here are the Google Maps variants for the hike. The top image (which you can click-through) is the route I took while the embed below it shows Google’s recommended route. 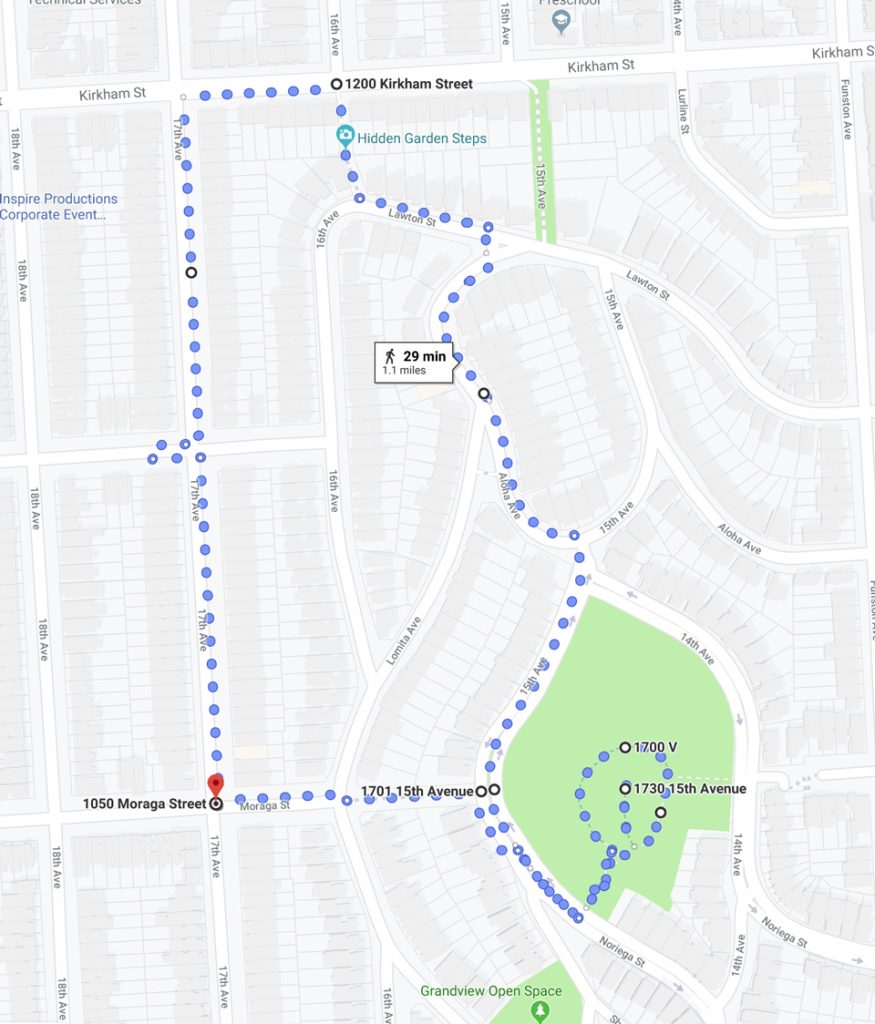 I have the hike starting at the bottom of the 16th Avenue Tiled Steps, but you can start anywhere along or outside the route. Street parking is typically available in the neighborhood. As always, be respectful of the residents who live in the area.

Before going into details regarding the landmarks, I’m going to recommend you add a stop at Home Cafe either before, during, or after your journey. Home Cafe is one of my favorite coffee shops in the city. They have two locations on the west side of the peninsula, and their Sunset location is at 1222 Noriega Street, which is just a short walk down the hill from the 16th Avenue Tiled Steps. Their coffees, teas, and baked goods are all top notch. 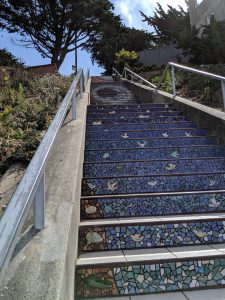 The 16th Avenue Tiled Steps start at the intersection of Moraga Street and 16th Avenue. Equally impressive are the quality of the mosaic tile workmanship and the artistry that depicts a series of sea to stars images starting at the staircase bottom. Each scene is broken up a landing area that also provides a nice rest stop before heading up the next flight of stairs. The image at the right is the top portion of the stairs where you can see a mosaic of the moon that is topped by a mosaic of the sun. Be sure to look at the scenes from a distance as you approach the steps. It took me a while to realize they were a collection of scenes because I was so taken back by the amount of work that went into placing the tile.

In addition to the stairs, there are beautiful views overlooking the Sunset District out to the Pacific Ocean as you climb the stairs. Below is one such picture that shows Moraga Street stretching out to the ocean.

After reaching the top of the steps, it’s a short walk to the base of Grandview Park. It’s there that you’ll climb another set of stairs to reach an impressive lookout area. It’s worth making the trek, especially on a clear day. The panoramic below is a taste of your reward for the effort. 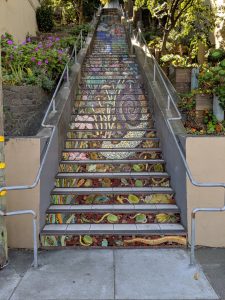 The route for this hike will take you down from the Hidden Garden Steps from the top. I’d say going from bottom to top is a better way to experience the steps, but doing both sets of steps from the bottom can be a challenge. In other words, you have to choose which you want to do bottom to top and vice-versa. The Hidden Garden Steps is a little different in that it winds its way up the hill through a series of turns. At each turn is a new mosaic scene to keep things interesting, although the overall theme, as you would expect, is that of a garden. The image to the right is the set of scenes looking up from the bottom. It’s pretty neat how you can pick out the large snail, mushrooms, and flowers in the mosaic.

You won’t find The 16th Avenue Tiled Steps and The Hidden Garden Steps at the top of San Francisco’s list of top tourist attractions, but they’re worth the visit. I would highly recommend making the trip to the western end of the peninsula during your visit. You will see a different side and get a different feel of the city that you won’t experience at Fisherman’s Wharf, The Financial District, The Golden Gate Bridge, China Town, Lombard Street, or the other more famous tourist destinations in San Francisco.