Despite a 40% drop in stock price from $700 to $400, Apple continues to roll. The company generated $43.6 billion in revenue this past quarter, $9.5 billion in profit and added another $12.5 billion to their hoard of cash, raising their cash balance to $145 billion. With these kinds of monstrous numbers, the company should be receiving nothing but praise and accolades. So why is Apple not receiving any love these days?

Stale products
I can’t count how many times iPhone users have asked me recently about my Galaxy Nexus, which is almost two years old at this point. One particular example stands out in my mind. When I was car shopping this past January, a junior salesman at the dealership was very curious about my phone and began asking me a lot of questions about it. When I asked him why he was interested, he said he was getting tired of his iPhone and was ready for something new. He didn’t like it that everybody seemed to have one, and he felt as though the design was getting old. Someone in their early 20’s who is not technically inclined complaining about a stale design is an indication of a larger issue in my mind. It would appear that Apple’s one design philosophy, which was such a powerful tool for adoption, is now having the opposite effect. People are experiencing gadget envy with their competitors.

Taking a look at the differences, or lack thereof, between the iPhone 4S and iPhone 5 is a good indication of how the design has grown stagnant. Outside of an extra row of icons on the screen, the devices really don’t appear to be that much different. 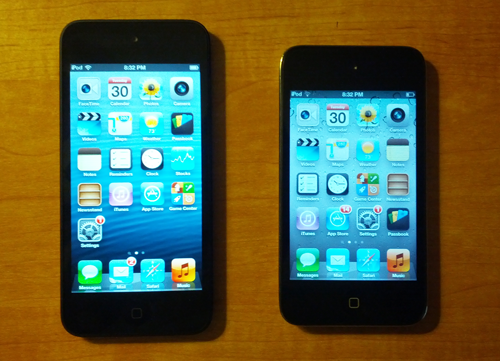 A recent sales analysis shows that the transition from the iPhone 4S to the iPhone 5 has been much slower than the previous generation (see this article at AllThingsD for a complete analysis). Depending on how you look at it, it either means that Apple is doing a good job servicing the lower end of the market with the iPhone 4S, or that there’s not much incentive to upgrade. If it’s the latter, this could be the leading signs of a fundamental problem since margins on newer products are much better than margins on older ones. Personally, I see it as the latter, meaning Apple needs to step up the innovation.

Arrogance and Elitism
When senior Apple executives fail to take their competition seriously (read Apple marketing chief Phil Schiller’s comments to the Wall Street Journal ripping Samsung and Android here), they are either out of touch or arrogant. Based on anecdotes from others in the industry, I believe arrogance is the answer. Apple still believes they are far and away best, when the reality is that their lead has eroded, and in some areas they have been surpassed by Android. By trying to belittle the competition, Apple is taking their user base for granted and assuming that they won’t look around at alternatives.  While they may not want to admit it, Apple is one poor product launch from falling significantly behind the ever advancing Android juggernaut.

There’s also the issue of elitism. Whether it wants to or not, Apple is crafting an image of itself as a product for the 1% by forcing obsolescence and mandatory upgrades. While product cycles are a fact of life in the tech sector, Apple is one of the few tech companies who openly flouts it. Unfortunately, it’s starting to create a backlash, even among Apple loyalists as this article points out (if you have time, peruse the comments to get a more in depth reaction to Apple’s tactics).

As a PC user, I find it strange that an Apple user is forced to upgrade their machine after four years when I’ve been using numerous PC’s in my house, some that are over 10 years old. I’ve been able to keep machines modern and operational by cost-effectively upgrading accessories, monitors, memory and video cards. Apple on the other hand, recommends throwing out the old and buying new. While this may be a good strategy for the elite, it doesn’t translate well to the lower ends of the market.

“Are you incompetent, bureaucratic, or out of touch?”
This quote from a Michael Mace article recapping the Apple Maps debacle summarizes things well (by the way, Michael is one of my favorite tech bloggers – well worth following). In the article, he simply asks the question of “How in the world did Apple let this happen in the first place?”. As a company that is supposed to amaze and delight its users, releasing half-baked products does not instill confidence in its users and removes some of the luster from its well polished marketing machine. And while Apple did eventually try to make amends and apologize for the quality of Apple Maps, it begs the question if this is an isolated incident or an indicator of how product launches will be handled moving forward. I’m not a loyal Apple user, but I’m also aware that there were some glitches in the release of iOS 6 that seemed to be fairly basic in nature regarding security and Wi-fi connectivity.

So let’s face facts – Apple isn’t going anywhere in the short-term, meaning the next 3-5 years. They have way too much cash in the bank to become irrelevant anytime soon. In fact, they will continue to generate significant sums of cash, and their cash stocks will only go down based upon how much they chose to pay out to their investors. Given the expected growth in tablets and phones, I expect more record breaking sales from Apple throughout 2013 and 2014. The question is how long they can maintain their momentum. The consumer market is fickle (just ask Sony), and while Apple will always have their core group of loyalists, the so-called fanboi’s, the general consumer market is not nearly as loyal. If the market perceives that Apple is falling behind, has lost its customer focus, and has become too arrogant, they will punish Apple not only in the stock market but in the one market that really counts – the marketplace.

So yes, the stock market may be punishing Apple over the short-term, but there are reasons for concern when you take a longer-term look at Apple’s prospects.