Last August, I funded my first Kickstarter project – Pressy, the Almighty Android Button. At the end of June (June 24 to be exact), my Pressy finally arrived. It took about 10 months from the funded date of August 30, 2013. To be honest, I had basically given up on the project since the updates, which started out fast and furious, had slowed to a trickle once they announced they were having quality problems during manufacturing. A couple of visits to their Kickstarter page revealed lots of frustrated backers that, like me, had given up hope on receiving their Pressy. Since I hadn’t received an update in some time, I was surprised to see the package on my desk when I came home from work.

I was excited to give it a try. Feeling like Ralph from a Christmas Story when he receives his Orphan Annie decoder ring, I quickly ripped opened the box. I purchased the version that came with a keychain holder. The hardware was exactly as promised. The Pressy fits snugly into the keychain holder so it won’t fall out. The Pressy button itself has a nice low profile with the button portion of the device flush with the button flange. I’ve included a couple of pictures below so you can see the finished product. 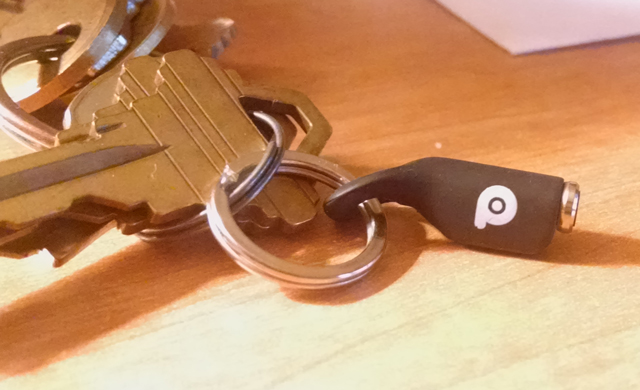 In order to use the button, you need to download the Pressy App. You can either do it by going to this link in the Google Play Store, or the packaging has a QR code to scan that will take you right to the App’s Play Store listing. Once you install the app, you need to activate it with the code provided in the package.

The app is straight forward to setup and configure. When you launch it, there are a few configurations preset such as Toggle mute, Open camera, and turning on the device flashlight. 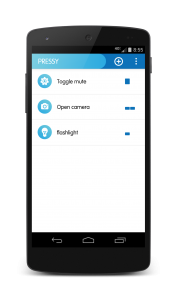 To add a new function, you press the ‘+’ sign at the top of the home screen. From there you can set it to call or message someone, perform a camera function, turn on the voice or video recorder, play media, run an app, or adjust phone settings. 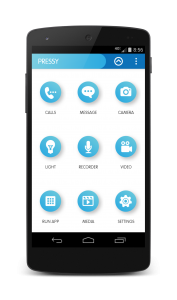 For example, if you want to use Pressy to open an app, you would select ‘Run app’ in the lower left corner of the screen and fill in the options shown on the screen. 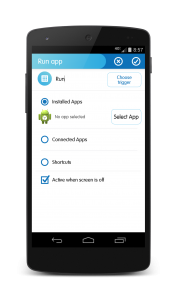 You can program the button to recognize a wide range of triggers. Just about any one, two, or three press sequence of short and long taps are recognized. 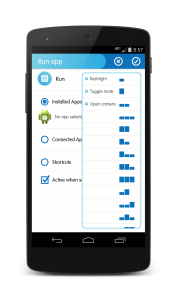 After setting up a couple of new triggers, I plugged the Pressy into my phone to see how it would work.

As soon as you plug the Pressy in, the phone recognizes the button and asks you to confirm that it is indeed the Pressy hardware. After confirming, the button is active and can be used to control the phone. The button fits nicely in my Moto X and only protrudes slightly from the phone. It can easily be left in the phone all the time.

My first impressions using the button is that it works, but it’s a little tough to operate with my Moto X. It recognizes simple short and long presses, but trying to do combinations of short and long presses are difficult to control. It worked best for me when I went into the app settings and changed the response time to ‘Slow’. This helped the button to better recognize the tap lengths and combinations, but it was still hit-and-miss. I’d say that it worked about 50% of the time after changing the settings. Before changing the setting, the recognition rate was closer to about 25%.

Since receiving the button and playing with it for a couple of days, I’ve set the button aside and haven’t tried to do much with it. It’s a bit of a gimmick and not an essential item that I need for my phone. A friend of mine got a Pressy as well, and he uses it quite a bit to control the Bluetooth on/off setting. In other words, just because I didn’t find the button that useful doesn’t mean you won’t as well.

Overall, I’m not disappointed. In fact, I’m pretty happy with the whole project, particularly how professional looking both the hardware and software turned out. I just don’t have enough time right now to spend learning how to use it. I’m sure with a little time investment I could figure out how to get it to reliably recognize my button presses. It’s even possible that the app improvements the Pressy team has released have improved the operation.

Either way, I’d like to congratulate the Pressy team for completing the project and thank them for sending me the product as promised. Now if I can only make some time to figure out how to use it better.