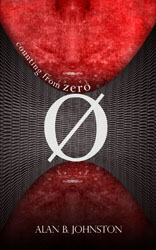 Another sub-genre of science fiction that keeps coming up in my recommendations is internet security, cyber-threat, and zero day attack novels. I’m sure it’s linked to my reading of Cyberstorm and Zero Day. Anyway, one of the books that appeared in the list and looked interesting was Counting from Zero by Alan B. Johnston. Johnston is an internet security specialist who has traveled the world speaking at events and conferences about the topic. He’s even spoken to governments about it as well. I figured that the book would be a good balance of fiction interspersed with nonfiction material covering the topic of internet security and online threats.

The book is centered around an internet security consultant named Mick O’Malley. Through the course of events in the book, Mick stumbles onto a growing security threat that is spreading around the internet. Variants of the virus code have start appearing on various servers, even infecting his own personal, supposedly secure servers. Mick gets called in on a consulting assignment and discovers that the virus is bigger than he imagined and that hackers are assembling a massive botnet to unleash the ultimate zero day attack. Mick enlists the help of various friends and ends up on quite an adventure trying to track down the owner and origin of the code in an attempt to stop it. Going further would spoil the story, so I’ll leave it up to you to read the book to find out what happens.

I liked the way Johnston weaves in educational material around viruses, worms and other internet security threats throughout the book. He also discusses ways that you can protect yourself from hacking through things like encryption. Johnston does this in a way that is very reachable, so even if you don’t have a software background, the technical details will be easy to understand. I would go as far as recommending the book if you’re interested in learning more about the types of security threats on the internet, how they are deployed, and ways you can protect yourself from them.

While I found the security pieces well done, the story was a little disjointed. There were a couple of story arcs that were introduced but not developed, relationships between characters were introduced but not pursued or developed, the ending felt a bit rushed, and there were a couple of plot twists that were foreshadowed but not revealed. It felt a little like a first novel, which it is for Johnston.

It’s a good book, and one that could be outstanding with just a little polish. I still give Johnston a lot of credit as the book does an excellent job of breaking down the complex topic of internet security in a way that anyone can understand. Even though I wouldn’t suggest it as one of my must reads, it’s worth reading if you’re interested in being entertained while learning more about the basic of internet security and how cyber attacks are developed and launched.