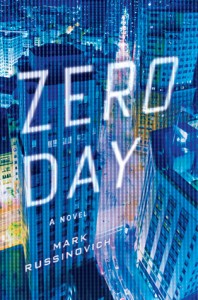 After being a bit disappointed with Cyberstorm by Matthew Mather, I decided to read Zero Day by Mark Russinovich. Zero Day is similar to Cyberstorm in that both books are stories about computer viruses gone wild that wreak havoc and destruction on the computer infrastructure of the United States.

Zero Day starts out by describing a series of apparently unrelated computer glitches. One of these glitches threatens to bring down a major New York City law firm, so their IT department calls upon Jeff Aiken to identify and fix the problem. Aiken has a history in IT security, as well as a history working within the IT groups of various government intelligence agencies. Aiken ends up calling in a couple of favors from one of his former government colleagues, Daryl Haugen, an attractive government IT security specialist who is investigating the source of these unrelated computer glitches.

Through their work together, they discover that the glitches are related. What ensues is an action packed trek across the globe to identify the source of the virus and stop those behind it before they unleash destruction on the infrastructure of both the United States and the world at large. It’s a page turner that is full of action and suspense that I found hard to put down.

Unfortunately,  the chase to stop the virus only takes up the last third of the book. The first two-thirds of the novel is slow developing and was difficult for me to power through. Sure, some of it helped to build up to the ending, but there were a couple of gratuitous violence and sex scenes that felt unnecessary and loosely connected to the story. It was like scenes you see in a movie that are purely inserted for visual entertainment but serve no real purpose in moving the story forward.

That being said, I found Zero Day to be much better than CyberStorm. While Zero Day moved a little slower at the beginning, the story felt more believable than the surreal catastrophic picture that Cyberstorm painted. It also got into more of the details and explained the science behind computer viruses, which I enjoyed.

I wouldn’t put Zero Day in my must read category, nor would I recommend putting it at the top of your reading list. However, if you’re interested in being entertained while learning about the risks and effects that a large scale computer virus attack could have our infrastructure, then Zero Day is one of the best books out there. Let’s just say that it was good enough that I’ve put the second book in the series, Trojan Horse, on my reading list for next year.