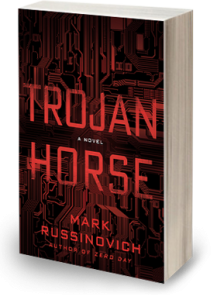 Almost one year ago, I read Mark Russinovich’s first novel, Zero Day. Even though it didn’t make my Must Read list, it was a strong enough first effort that I put his second novel, Trojan Horse, on my 2014 reading list. I finally finished it earlier this month.

Trojan Horse features the chief protagonists from Zero Day – Jeff Aiken and Daryl Haugen, so it can be considered a sequel. In the second installment, they are once again called in to identify and fix damage that has been inflicted by a virus of unknown origin. Through his debugging efforts, Aiken begins to trace the virus back to state governments, first in Iran and then China. He calls in his girlfriend Daryl to help, and their involvement ends up putting them in the middle of a state sponsored international espionage plot.

As in the first novel, Russinovich spends the first half of the book setting up the action scenes that keep you engrossed throughout the second half. He again does a great job explaining the science behind viruses, how they are developed, and who is behind them. Given Russinovich’s background as a cyber security expert, it makes the premise of the book very believable. Since he also ties in a lot of current events, including Iran’s desire to enrich uranium and the Stuxnet virus that hindered their efforts, the line between fiction and non-fiction is heavily blurred. There were points in the book where I wasn’t 100% certain if what I was reading was a work of fiction. In fact, it was quite scary considering the scenarios and events in the book are very plausible and likely taking place at some level in the real world.

I like that the book stands on its own. I’ve grown a bit tired of reading elaborate book series given the limited time I have available to read. While reading Zero Day helps with context in a few areas in Trojan Horse, it’s not a requirement. I also like that the book ends cleanly, doesn’t leave you hanging, and doesn’t require you to read the next book in the series (which is Rogue Code for those keeping score at home).

I wouldn’t consider Trojan Horse a Must Read, but it’s just as good as Zero Day, if not a touch better. In other words, it provides a good balance of science and action, and it will keep you entertained. I would certainly recommend it, especially if you liked Zero Day. It’s a good book to grab if you’re looking for a little action-adventure reading over the holidays that will also teach you a thing or two about cyber security and the future of cyber warfare. It might even throw a bit of scare into you as well.