As a fun exercise using the magic of Quicken, I created a graph of my triple play cost (phone+cable+internet) since 1997. Even though the data was collected in monthly intervals, I averaged the cost annually to smooth out fluctuations, which were especially prevalent in the phone data pre-2008 when long distance phone calls were still being charged by the minute. 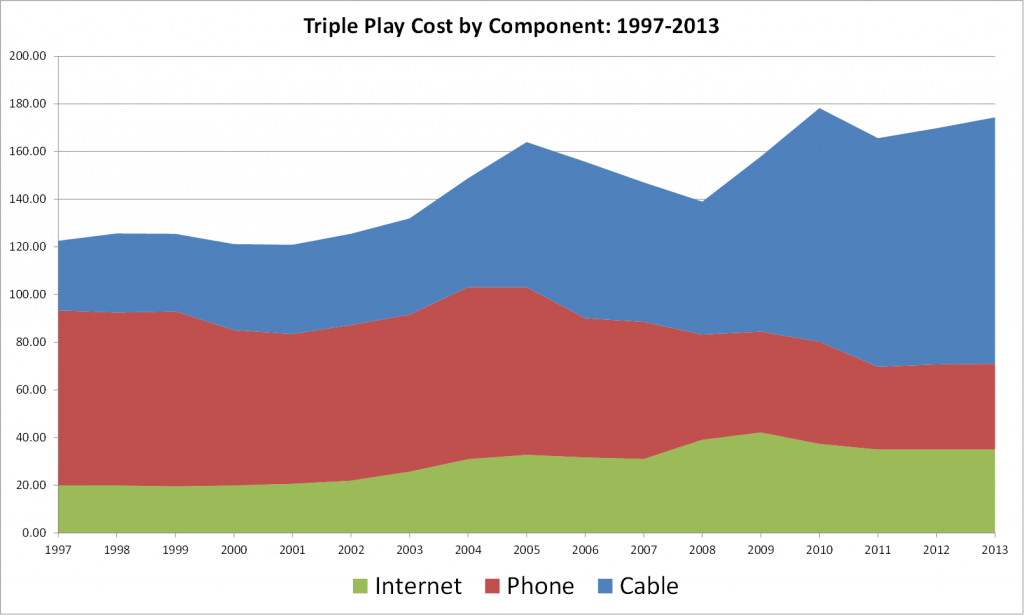 What the data shows us is not a surprise, and I suspect that is indicative of what is happening in most households. The overall cost of the triple play has increased ~50% over the last 15 years from $120/month to $175/month. However, it’s not the total cost of the triple play that’s noteworthy. It’s trends in the individual components that are interesting. Namely,

What the analysis tells us

I’ve believed for over 10 years that content programming would migrate to an on-demand model. I thought for sure that it would’ve happened by now, but the entrenched players have been slow to move and have used government lobbying to slow down and impede competitive services. History has shown that these tactics only delay the inevitable. The companies that refuse to change are eventually replaced by those that embrace the new business models.

Bottom line, the cable companies and content providers need to start allowing us to choose what we want, when we want it, and only charge us for what we use. Otherwise, we’re going to start letting companies into our living rooms that will.

1 thought on “Analyzing the cost of the triple play”