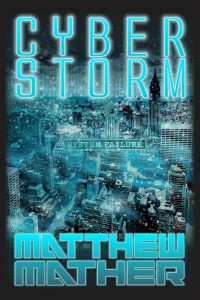 As part of my recent reading binge, I’ve taken a liking to hard science fiction books and tech thrillers. The description for Cyberstorm by Matthew Mather fit both of those areas, so I decided to pick it up (it didn’t hurt that it was also available at a special promotional price of $0.99).

The brief plot description, without giving too much away, is that an electronic attack on the country’s infrastructure grinds New York City to a halt just as a series of major snowstorms is about  to hit. From there, the story’s chief protagonist, Mike Mitchell, has to team up with other members of his apartment to fight for his, his family’s and his friends’ survival.

While the overall premise of the story is plausible, there were a number of elements of the book that bothered me to the point of making the story unbelievable:

Overall, I wouldn’t recommend the book. It turned out there wasn’t enough in the way of hard science fiction to satisfy my taste, and the tech thriller side of things felt more like a low budget horror movie. There’s much better apocalyptic cyber thrillers out there that contain a better description of the technology behind cyberattacks as well as a more engaging plot. For example, I’d recommend Daemon by Daniel Suarez or Zero Day by Mark Russinovich before Cyberstorm.