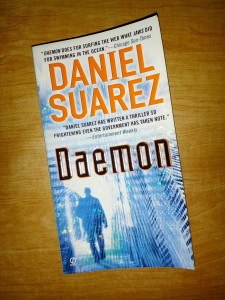 After enjoying the William Hertling books Avogadro Corp and A.I. Apocalypse, I figured it would be a safe bet to try another Brad Feld recommendation and pick up Daemon by Daniel Suarez. I was right.

Daemon is a suspenseful, riveting, action-packed mystery thriller. It starts out with a series of events that occur in the Potrero Valley near Thousand Oaks, CA. Through an investigation of the incidents, it slowly becomes clear that they are related and being coordinated by a dead man, or so it seems. As it turns out, he’s written a computer program, or daemon, which gets initiated by news of his death and whose subsequent actions are triggered through current news events. The program incorporates elements of artificial intelligence to morph itself into something bigger and more encompassing over time, and depending on your point of view, that something can be considered either good or evil for society at large.

The story holds together really well, and kept me engaged for long stretches of time. There were a couple of nights where I was unable to put the book down and stayed up much later than I intended. To top it off, Suarez’s descriptions of the environments are very accurate and realistic. I’m pretty familiar with the Portrero Valley, and and his descriptions made me feel like a part of the story. The problem, I ended up having very vivid dreams about the characters and events of the book. Yes, the story is that engaging, and the characters are very well developed.

Suarez also does a great job of building the book to a crescendo at the end and will leave you wanting to move right onto the sequel, Freedom, which I promptly did, of course.

Freedom continues the story from Daemon and did not disappoint me. The story moves just as quickly as Daemon, the action scenes were just as intense, and he takes the development of the characters to another level. By the end of the book, you feel a strong connection to all of the main characters in the story. My only disappointment was the climax of Freedom, which surprised me in how predictable it was. The rest of the story was full of so many plot twists that I was surprised Suarez didn’t throw a few more in toward the end of the book. On the other hand, I did find the ending satisfying and appropriate, and that’s all I’ll say so I don’t ruin the book for you.

I would strongly recommend reading both Daemon and Freedom, especially if you enjoy thrilling, action-packed books with strong characters. It’s also a great commentary on technology and how it can be used for both good and evil purposes. Suarez clearly has some opinions and biases that are apparent throughout the book, but they are done in such a way that doesn’t take away from the story.

One last word of caution before you start reading. If you are concerned about the government’s ability to monitor our electronic communication, such as the NSA PRISM program, or tend to be a conspiracy theorist, these books will fuel those thoughts. It gave me a lot to think about regarding how much of what we do is electronic and how easily it can be monitored, controlled, and manipulated. Well worth reading if you’re curious about the technology that governments, law enforcement agencies, big business, and others are using to track us.

Bottom line, Daemon and Freedom are must reads in my opinion.