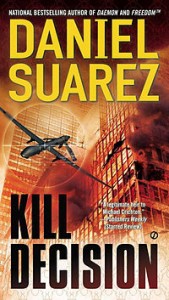 When I decided to get back into reading, one of the first books I picked up was the Daemon/Freedom book series by Daniel Suarez. I really liked it. Suarez did a great job of mixing near-term technology into an action-packed story that kept me on the edge of my seat. In fact, there were many evenings where I found myself staying up later than normal because I couldn’t put the book down. Because of how much I liked those books, I figured I should add Suarez’s next book, Kill Decision, onto my reading list for this year. I was pretty excited when it finally popped to the top of my list recently.

Kill Decision is about the evolution of drones, primarily those used for military purposes, and how these drones could evolve into autonomous machines through the use of artificial intelligence (AI) technologies that are in development. As with his other works, the technology that Suarez references in his book is not some far-out, make-believe fantasy. Much of it is either already available or being researched. It was amazing to see how simple AI additions to existing drone technology could turn it from piloted (or human guided) machines into self autonomous killing machines. He shows how AI could enable drones to seek out and destroy targets, both human-based or object-based, through image recognition technology. He also shows how drones could be used to protect valuable assets. Both techniques are based upon AI technology that is similar to the way insects attack predators or protect their colony.

Unfortunately, I didn’t find the overall story of Kill Decision nearly as engaging as his previous works. There were spurts of action here and there, but overall, the story drug on in many places. It felt as though Suarez spent a bit too much time trying to develop the characters and environment rather than weaving it into the plot. Since the characters and environment weren’t as interesting to me as the technology, I found that it took away from the overall quality of the book.

I found Kill Decision a great book to read from a technology point of view. If you’re interested in how drone technology could evolve, then I’d recommend picking it up. It will also make you think about the evolution of drones in warfare and the ramifications it has on a geopolitical scale. There’s also a little conspiracy theory baked into the plot, which I doubt is that far off from how government activity and public perception is manipulated.

Overall, it’s an OK read but not one that I would highly recommend. Having said that, it hasn’t diminished my desire to read his latest book, Influx, which is slowly but surely making it’s way to the top of my ever expanding reading list.