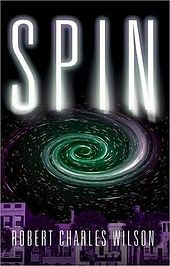 For my next dive into science fiction, I chose to read Spin by Robert Charles Wilson. Spin was published in 2005 and is the opening of a three part  book series that includes Axis and Vortex.

The premise behind Spin is very intriguing. The earth has been placed in a “spin membrane” which slows time down for the inhabitants of earth while the universe continues to age naturally. On the surface, this seems like a story line that would be hard to develop, but Wilson does a great job of stretching your imagination to grasp the ramifications of a universe that ages faster than earth as well the possibilities it presents.

The primary character in the book is Tyler Dupree, who, when the book opens, is struggling through some sort of illness which Wilson chooses not to explain. Through the liberal use of flashbacks, it becomes apparent why Tyler is sick and how he fell ill. Wilson also uses the flashbacks to explain how and why the “spin membrane” was put around the earth.  To divulge any more would spoil the book as it is full of plot twists that keep you guessing as to how the present relates to the past.

I wouldn’t put the book into my must read category, but I found it very entertaining. It’s a fun recreational read that will keep your imagination engaged while Wilson explores deeper issues around human nature, particularly around issues such as greed, power and religion. As mentioned at the top, there are two follow on books, Axis and Vortex, that expand upon the original story, but I got my fill with Spin and intend to pass on the sequels for the time being.