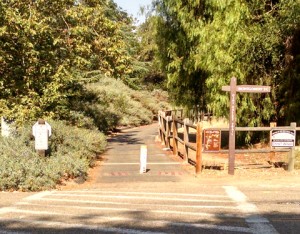 After surviving our ride to the rock, my oldest daughter and I decided to ride the Ventura River and Ojai Valley Trails. It’s a little over 15 miles one way and involves a steady uphill climb just about the entire way from Ventura to Ojai, which means it’s a steady downhill ride back. I had ridden the Ojai Valley Trail when the kids were younger, and from what I could remember, the ride (and climb) was manageable. Of course, I was almost ten years younger at the time.

We started out in Ventura. The Ventura River trail starts at the far west end of Ventura by CA 33. There are a few places to park in the area, but the best place to park is at W. Main Street and Peking. We arrived at the lot just after 7AM on a Saturday, and it was fairly empty. To get to the start of the Ventura River trail from the parking lot is a short ride of less than 1/4 mile on city streets. You take a right out of the parking lot, a left at the first light, and then your first left after the CA 33 exit ramps. 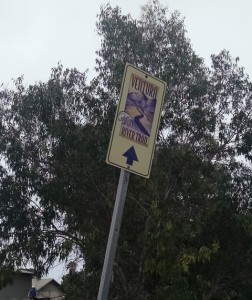 Alternatively, you could park at West Park in Ventura. It cuts the first 1/2 mile off the trail, but you don’t need to navigate any city streets to get on the trail.

The Ventura River Trail runs from W. Main Street in Ventura to Foster Park. It’s about 6 miles in length one way with an elevation climb of 200 feet. The climb is gradual but steady so you don’t even realize that you’re climbing the entire way to Foster Park. Once on the trail, it is isolated from the roadway, which makes it safe for biking. It’s also paved the entire way and wide enough to ride side-by-side with enough room to allow on-coming bike and foot traffic to pass  by.

After you pass through Foster Park, the trail turns into the Ojai Valley Trail, and that’s were the fun starts. For the most part, the grade is pretty steady, but there are a couple of places where it gets steeper and requires extra effort to maintain a steady pace. The trail is 9.5 miles in length with an elevation rise of over 550 feet. The climb comprises the first 8 miles of trail. You’ll know you’ve reached the top when you come to a shopping plaza at the corner of CA 33 and CA 150. From there, the last 1.5 miles through Ojai is a flat ride to the end of the trail at Soule Park golf course. 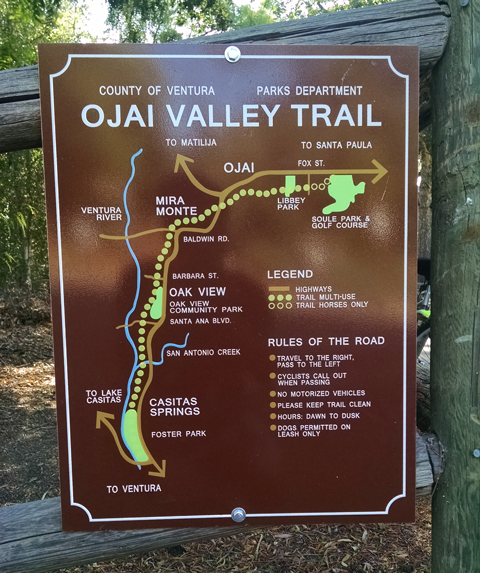 For completeness, I’ve included the elevation profile below. The climb and descent are, obviously, mirror images of each other. It should be pretty clear where the halfway point is.

We rode at a steady pace, but we weren’t trying to set any records. Our average speed was just over 10mph, and it took us almost 3 hours to complete. If you’re interested, you can see the mile-by-mile splits here.

I’m hopeful that we’ll be able to do two more rides before Amanda heads back to college – the Omar Rains Trail / Caltrans First Adopt-a-Bike-Path and the Marvin Braude Bike Trail (also known as The Strand). It would make for four scenic and quite memorable rides this summer.