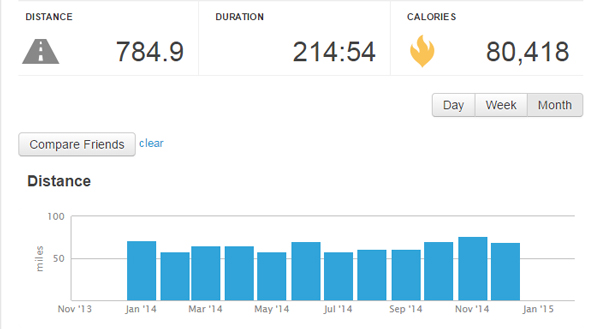 In addition, I also made it on quite a few long bike rides last year. I rode the Ojai Valley Trail, the Marvin Braude Bike Trail, the Pacific Coast Bike Route, and rode to The Rock twice. Combined with riding my bike to work during the summer, I logged over 1,000 miles in Runkeeper.

The goal for 2015 is to hit 700 miles walking. I am going to break it up into four segments of 175 miles per calendar quarter in order to keep myself on track.

I’m also going to add another goal to log over 1,000 miles for the year. It’s going to require me to keep up with my cycling to fill-in what I don’t do walking.

“Eating better” wasn’t a good goal as it wasn’t specific or measurable. So I need to make some adjustments in 2015 to improve my eating habits.

Entering 2015, I’m just above 165lb in weight. My goal is to consistently stay in the range of 160-165lbs throughout the year. As I mentioned above, it is going to require eating better, but that isn’t a good goal.

So for this year, my goal is to cut-out added sugar whenever possible. I am going to be a lot more diligent about reading food labels, especially ingredients, in order to reduce my sugar intake as much as possible. That doesn’t mean I won’t have the occasional piece of chocolate, cookie, scoop of ice cream, or slice of pie, but I want to be a lot more cognizant about what I’m eating. Cutting out sugar is something that is a lot more actionable than just eating better. Plus, I can use the goal as a benchmark to see if it helps me to improve and control my weight.

2014 was a good year, and writing down my fitness goals certainly helped. Now that I’ve documented them for 2015, it’s time to get after it!