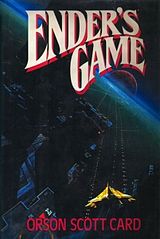 On my sci-fi reading binge over this year, Ender’s Game by Orson Scott Card appeared on my Amazon suggested reading list. I’d heard about it through a number of sources as a classic science fiction book, saw that the movie was coming out this fall, and figured it was worth reading.

Fortunately, I was right.

Ender’s Game is classic science fiction. It’s set in a future where Earth has fended off an attack by aliens due to the heroic efforts of a battle commander named Mazer Rackham. In an effort to defeat the alien force, the Earth’s countries have formed an alliance to preemptively strike them. To achieve their objective, they’ve decided that training exceptionally bright children for battle are their best hope.

That’s where Ender, whose full name is Andrew Wiggins, enters into the plot. He is a highly intelligent child who has the stigma of being a “third”, meaning that his parents had him in violation of Earth’s two child policy. Besides being picked on by his older brother, he is also ostracized at school. His older sister tries to protect him, but after an altercation at his school, he is drafted into service by the International Fleet.

It is at this point where the action begins, and the story gets intense. I don’t want to spoil the plot, but I will tell you that Card does a great job of keeping you engaged throughout the book while using Ender’s teachers as well as his brother and sister to demonstrate the flaws and misgivings of our society and humanity in general.

I was captivated by the story and thoroughly enjoyed the book. So much so, that I’m not certain whether I’ll see the movie or not. The special effects look awesome, and they’ve certainly enlisted a great cast with Harrison Ford and Ben Kingsley, but I’m concerned how true they can stay to the story. For one thing, Ender starts the story as a six year old and is only ten during his time at Command School. I’m not sure the movie will be able to accurately portray his youth, which is an integral part of the overall story in my opinion.

By the way, Card continues the story of Ender in subsequent novels. I believe there are five in total. I’ve not decided whether I will continue onto the next book in the series. While I thoroughly enjoyed the first installment, it’s difficult for me to envision how Card can maintain the same action and intensity throughout the series given the outcome of the first.

Anyways, I would put Ender’s Game in the must read category and highly encourage anyone who is remotely interested in the movie to make sure they read the book first. It’s a great read and will let you experience the story the way Card intended it without any adaptations that may have been required to turn it into a feature film.