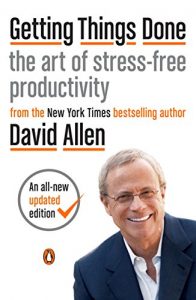 I’m in the middle of a productivity reading binge this year. It was inspired by Cal Newport’s Deep Work, which I read during the first half of 2018. Since then I’ve read the 80/20 Principle by Richard Koch and Get It Done by Michael Mackintosh. The next book up on my productivity journey was Getting Things Done: The Art of Stress-free Productivity by David Allen. It was recommended by one of my co-workers, Julie Yousefi. Given how organized her desk always is, I figured she must be on to something and that Allen’s book was worth a read.

I wasn’t prepared for what I was getting into when I opened up Getting Things Done. Most books on productivity are theoretical. They give you some broad, generalized ideas that are left as an exercise to the reader to figure out how to incorporate into your daily routine. More often than not, I store away those theories as “to-do’s” and never get around to figuring out how to put them into practice.

Well, I’m here to tell you that Getting Things Done is short on theory and long on practical ideas that you can implement immediately, which is a good thing.

To fully get Allen’s system, you have to start by understanding his philosophy. This quote on his website sums it up well:

I’m often identified by my description of a relaxed balance of perspective and control, known as ‘mind like water.’ This is not an empty mind; it’s a mind that is operating at a more productive and creative level. GTD® helps you achieve and maintain that optimal condition, by using your mental energies to think about things rather than think of them.

It’s the ‘mind like water’ concept that is so important and effective. Like he says, it’s not about having an empty mind. It’s the relaxed, peaceful, balanced mind that allows you to operate at your most productive and creative level. The key is thinking ‘about’ rather than ‘of’. As with all language, it’s a subtle difference in words that has massive implications.

I found Getting Things Done to be informative, overwhelming, and inspiring, all at the same time. Allen starts by having you take inventory of everything you have to do. All of your projects, big and small. All of your tasks, no matter their size. Everything that you have sitting on your desk, in your mind, in your attic, in your garage. Effectively, you take any and all things that require your attention and write them all down. Then the fun begins.

So how you do start getting things done? You document the next task for each of your important projects, and then, get ready for this, you start doing those tasks! It’s such a simple concept, but when you don’t have an organizational system for everything you need to do, it’s easier said than done. And that’s the beauty of Allen’s system. He shows you how to take the overwhelming nature of everything that demands your attention and then breaks it down into a system that gets stuff done.

For those things that aren’t important, you document those and write down their next steps. The key is that you don’t do the next steps, but you file them away for later. Then, when those projects become important, you already have a plan ready to go. Getting the non-essential out of your head and into a filing system is one of the most powerful aspects of the system that promotes his ‘mind like water’ philosophy. When you unload the mundane from your mind, you free up the mental bandwidth to be more productive with what you’re currently working on.

I’ll confess that I didn’t do the complete inventory, which I should come back to one day. Some of it is the time it takes, and some is the fear of what it might uncover. However, I have taken many of his implementation steps and put them into practice. For example, I’ve developed the habit of daily clearing my email inbox. I either respond immediately to the simple requests and check them off as done, or I file the complex tasks for later by capturing an action on my to-do list and moving on. It’s amazing how a simple thing like a clean inbox clears the mind.

Overall, implementing the techniques from Getting Things Done has allowed me to free up the mental space to focus on the big picture, which in turn has unleashed creativity that I can apply to the big projects and problems in work and life. On top of this, because his system has you naturally take care of the smaller things, I’m finding that I’m more effective on a daily basis. It’s what makes Getting Things Done so powerful. It helps you become more efficient with your daily tasks, which makes you more productive, which in turn makes you more relaxed because you have less open loops running inside your mind. In other words, the less your mind has to handle (i.e. worry about), the more effective you can be in the moment.

Getting Things Done is a Must Read, especially if you are struggling with problems of too much to do and not enough time. Somehow, we’ve been conditioned to believe the myth that we can do it all. We rely on our limited mental capacity to keep things organized. The result is that we run around in a state of being too busy. The answer is that you need to organize and prioritize. Then, instead of being too busy, you can clear the desks and attack those things that matter most to you. Getting Things Done is a system that will do just that. I highly recommend reading the book, understanding the system, and giving it a try. What have you got to lose?