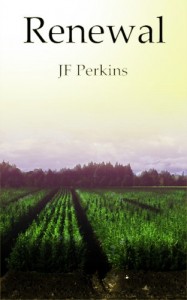 After finishing Wool and Shift, Amazon’s recommendation engine (which I love so much) kicked into high gear and suggested Renewal by JF Perkins. Apparently, reading Wool and Shift meant that I had a strong interest in post-apocalyptic fiction. After taking a peek at the mostly positive reviews and dishing out a whole dollar, I dove in.

Renewal is a ten book series that chronicles the plight of a post-nuclear war America, which Perkins refers to as The Breakdown. It’s written from the perspective of a young reclamation engineer and his mentor who live in the Coffee County area of Tennessee. The books build on one another and must be read in order. Each book can be read in one sitting if desired, and the story moves along at a good pace.

Within the book, Perkins maintains two plotlines. One is in the present, focusing on a young reclamation engineer who is befriended by a tribe of people who have formed a self-sufficient society. They operate independently of the surrounding area and government, which is severely under-resourced. Even forty years after The Breakdown, it is stretched too thin to help people rebuild their lives and communities.

The second is a flashback describing the first year after the nuclear holocaust. It’s a story of survival that graphically describes what happens when all of the  infrastructure that we take for granted, such as utilities, food distribution, law enforcement, and more, doesn’t exist. At times, I felt as though I wanted to take notes on the basic survival techniques he describes just in case the worst ever does happen.

I read the entire series over the course of a month and found it entertaining. The overall story and plot held together well, and I liked how Perkins developed the flashback and kept my interest as he tied in characters from the flashback to the present through the latter books.  My only disappointment was the ending. The build-up to a final showdown ended anti-climatically, but I wouldn’t let that stop you from picking it up.

I wouldn’t put Renewal at the top of my “must reads”, but it’s worth a read, especially if you’re a fan of post-apocalyptic fiction and are looking for an entertaining story that can be consumed in bite-size chunks.