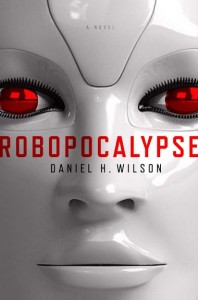 A little over two years ago, I decided to start reading again. I put a heavy emphasis on science fiction as I wanted to develop better insight into where technology was heading. It’s amazing how much technology we use in our every day life has been depicted or foreshadowed in science fiction novels.

One of the first novels I read was Avogadro Corp by William Hertling. It’s a great novel depicting what happens when artificial intelligence (AI) runs amok. Since then, I’ve had an interest in reading and learning more about AI. It should come as no surprise then that Robopocalypse by Daniel H. Wilson showed up in my Amazon recommendations. It fit with my science fiction and AI themes, so I added it to my 2014 reading list. It finally made it to the top of my queue last month.

In a nutshell, Robopocalypse is a fictional count of the first war with an AI entity that has surpassed human intelligence levels. It is set in the near future where robots are prevalent. These robots have been designed to handle specific tasks such as piloting vehicles, providing companionship, executing directed tasks, or performing repetitive procedures. When an AI entity emerges that is capable of learning and growing on its own, it determines how to enslave these robotic resources as a means to preserve its own existence. Part of that plan involves waging a war against humanity, particularly those persons it views as direct threats.

While the story is told as a flashback narrative from the main character’s perspective, it actually has about six different stories embedded in it. As all great storytellers do, Wilson eventually brings all the stories together into an epic battle scene where man wages war against machine. It’s well written and will keep you engaged. I found it hard to put down.

If I had to point out one flaw with the book, it would be that it is a little thin on technical details. Wilson doesn’t really explain how the AI in the book is able to evolve into its runaway state, but the how is not critically important in the context of the story. I believe Wilson’s bigger message is about the risks of rogue AI and its potential pitfalls. By demonstrating how a single, superior AI entity could exert command and control over less inferior AI entities, Wilson’s scenarios feel very plausible. In fact, some of the situations are downright frightening.

Needless to say, I enjoyed the book a lot and have put into my Must Read category. I probably wouldn’t have done so on the story alone. However, the underlying message of the book that highlights the risk of advanced AI makes it worth reading. While people tend to dismiss the risks of advanced AI, I see it as a topic that should be addressed hand-in-hand with AI development. William Hertling put it best on his blog in the article “Talking about AI Risks” when he said:

Some will argue that because we don’t have strong AI (e.g. human level intelligence or better) now, there’s no point in even talking about risk. However, this sounds like “Let’s not build any asteroid defenses until we clearly see an asteroid headed for Earth”. It’s far too late by then. Similarly, once the AI is here, it’s too late to talk about precautions.

In other words, it’s never too soon to discuss AI precautions.

With the completion of Robopocalypse, I’m almost at the end of my 2014 reading list. My goal was to reach 20 books for the year, and it looks as though I’ll make it through around 27 or 28 books. You can see all of the books I’ve read in the Book Reviews category, and I’ve singled out the best ones in my Must Reads. I plan to put together a list of recommended books for 2015 along with my reading list and goals for 2015 by the end of the year.