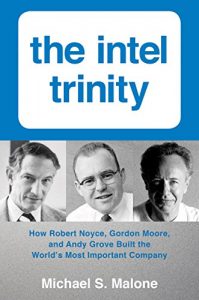 I started my career working in the semiconductor industry back in the early 90’s. By that time, Intel had firmly established itself as the leader in the microprocessor space. They were in the process of moving their 486 to mainstream production. In fact, the first personal computer I purchased had a 486 processor that operated at a blazing 20MHz.

Being inside the industry, I was generally in awe of Intel. They were on the cutting edge of semiconductor development. They were the creator and keeper of Moore’s Law, which stated the number of transistors on a computer chip would double every two years. It was a law which drove Intel for over 50 years.

Given my history in the industry, and on the recommendation of a good friend and a trusted recommendation source (Brad Feld’s blog), The Intel Trinity: How Robert Noyce, Gordon Moore, and Andy Grove Built the World’s Most Important Company by Michael S. Malone felt like an interesting book to read. I’ve read quite a few biographical business books, but never one that was directly related to industry I was involved in. That reason alone had me eager to learn more about how the most influential company in the semiconductor industry came to be.

For me, The Intel Trinity read much like a history book. It takes you back to the early days of Silicon Valley, well before it became what it is today. Malone does a great job detailing the early days of technology development in the Valley. From his account, it’s pretty clear how it got the name Silicon Valley, even if there’s not nearly as much silicon and semiconductor development taking place there these days.

Malone highlights the critical roles Robert Noyce and Gordon Moore played in building the early semiconductor companies that started there. He goes onto detail their founding of Intel and their partnership that built the technical foundation in the early days of Intel. The historical plot thickens when Andy Grove is added to the mix, and it is fascinating to see how the combination of the three individuals blended to create what is arguably the “world’s most important company” as noted in Malone’s subtitle. Each member of the trinity played a valuable role in Intel’s formation and development – Noyce as the public face of the company, Moore as the technical leader, and Grove as the operations manager who made Noyce’s claims and Moore’s ideas a reality.

I’d be remiss if I didn’t tell you that The Intel Trinity can be a tough read at times. It is a true historical account, so it has a few dry areas. It’s still very interesting, and there are a lot of important business and startup lessons to be learned from Intel’s growth and development. I might not recommend it for everyone, but if you’ve spent any time in technology, particularly in semiconductors or a Silicon Valley tech company or startup, you should read The Intel Trinity. It will hit close to home and put substance behind all the legendary stories that you hear about the characters who created the early, dominant companies in that highly influential region.

Personally, I found the book enjoyable, even if it was a slower read. It was interesting, detailed historical account of events that I lived through and at times participated in on the periphery of the industry. I’m not going to suggest that it belongs in my Must Reads or Fun Reads categories, but it is a well written documentary of Intel specifically and Silicon Valley more generally. I’d highly recommend it to anyone who is interested in learning more about these two subjects, or to anyone who is directly involved in the technology space, particularly semiconductors.