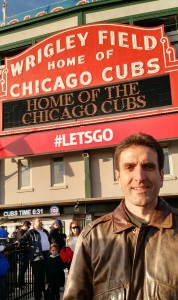 I’m not the biggest fan of modern day baseball. Even though I played quite a bit growing up, I lost interest in the late nineties. Free agency, labor strife and changes to the game to maximize television revenue undermined the reasons why I played and loved the game as a kid. I like baseball because of all of its history and traditions. So when I had the opportunity to see my first game at Wrigley Field on a trip to Chicago at the end of April, I jumped at the opportunity.

Opened in 1914, there is only one ballpark older than Wrigley – Fenway Park in Boston (which I’d already been to multiple times). Because of its age, Wrigley embodies all of the things I love about going to see a baseball game. It’s nestled in the north side community of Lakeview, shoehorned in among the restaurants, bars, businesses and apartments located in the area. Since it’s not a monstrosity that sits all by itself in the center of a sea of parking lots like most modern ballparks, it makes for a unique experience when going to see a game.

To make the day even more special, I was able to attend the game with my son. In order to get the full experience, we took the “L” from the north shore area of Chicago to attend the game. As we got closer to the ballpark, the train got more and more crowded with people adorned in Cubs attire. We knew we were approaching our stop at Addison when people started moving toward the door and Wrigley appeared off the right side.

Wrigley is only one block from the train station, so it was a short walk to the field. The atmosphere over that one block is awesome and reminded me a lot of the atmosphere around Fenway. There are street vendors selling hot dogs, sausages (or “brauts” as we were told) and all sorts of Cubs souvenirs. In addition, there are numerous bars and restaurants that are crowded with people grabbing a bite or drink prior to attending the game, or who have decided to take in the atmosphere and enjoy the game from the cozy confines of their bar stool.

While Wrigley is not the most modern facility, it has all the amenities necessary to enjoy a game. The place also reeks of history and tradition. I especially enjoyed the classic (and iconic) signage outside the facility. It’s awesome that they’ve kept the manual centerfield scoreboard, which is still maintained and operated. It was pretty cool getting to see the rooftops, although I was a little disappointed at how commercial they’ve become. From Cubs games I saw on television as a kid, the rooftops consisted of people in lawn chairs and coolers. Now, those same rooftops are filled with bleachers and luxury boxes. I was also a little disappointed by the addition of the jumbotron, which is new this year. I understand that it’s part of “modernization”, but it has the effect of overpowering the ballpark given how big the screen is and how small the stadium is.

In any case, I’d highly recommend catching a game at Wrigley if you’ve never been there before. It is a true throwback. It has great atmosphere and is a great place to catch a baseball game. And while my favorite team, the Pirates, were beaten by the Cubs that evening, it didn’t spoil the experience. If anything, it made a touch more enjoyable getting to hear the remaining crowd sing along to “Go! Cubs! Go!” at the end of the evening. And with this visit to Wrigley, I can now say that I’ve been to the three oldest baseball parks that are still operating – Fenway Park, Wrigley Field and Dodger Stadium.

I’d like to especially thank Steve Hudson for setting me up with tickets for the game and providing a few tips and recommendations that helped Brad and I get the most out of our experience.