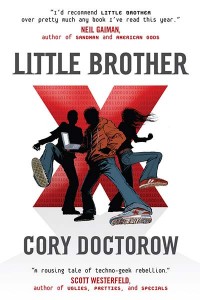 Three of my primary criteria for putting books on my 2015 reading list were recommendations from trusted sources, sampling “classic” sci-fi authors, and avoiding book series. Little Brother by Cory Doctorow fit all of these. It was recommended by one of my favorite authors, William Hertling. It is by a renowned sci-fi author. And, although it is the first in a series, it reads perfectly fine as a stand-alone story. Needless to say, I was anxious to pick it up and was happy to see it at the top of my reading list.

The lead character in the story is Marcus Yallow, a high school teenager. Marcus has a knack for hacking and uses his skills to counteract the tracking technologies his high school has put in place. He and his group of friends also spend a lot of time online, with one of their favorite activities being a scavenger hunt game that combines online and offline elements. During one of their hunts in their hometown city of San Francisco, a major terrorist attack occurs. Marcus and his friends end up being in the wrong place at the wrong time. They are swept up in a government crackdown in the city and are labeled as threats to the government, or terrorists if you will. After being released from detention, Marcus makes it his goal to get even with those responsible for detaining him, his own government. It leads to a series of adventures, twists and turns that makes for an entertaining read.

There are numerous technologies and computer hacking techniques that are described throughout the story. Doctorow does an excellent job explaining the concepts behind the technology in terms that anyone can understand. Doing this is an important part of the book. In order to enjoy the story, the reader needs to have a least a basic grasp of the technologies employed. Otherwise, the story would be hard to follow and less believable.

Overall, the story moves along briskly and is well written. However, I found it a touch too subversive and counter-culture for my liking. It also feels as though it is geared toward a younger audience, primarily those in their mid to late teens. For example, I found myself relating more to the challenges facing Marcus’ parents than to those encountered by Marcus himself. I guess that’s what happens as you age and have four kids of your own.

While I wouldn’t put Little Brother on my Must Read list, I’d still recommend it. It’s a good introduction to surveillance technologies and how the government uses these for both good and potentially nefarious purposes to target outspoken individuals and to constrain our liberties and freedoms. In other words, it illustrates the danger of unchecked, blanket surveillance and how it can end up targeting innocent citizens. If anything, you will gain a better understanding of why there is so much consternation over many of the government surveillance programs that have been put in place over the last 15 years.