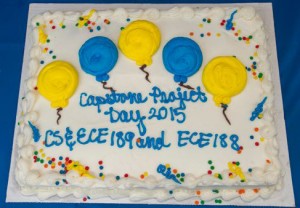 For the third consecutive year, my good friend Dr. John Johnson invited me to be a judge for the ECE189 Capstone Projects at UCSB. Given my experience the last two years (which I documented here and here), accepting was a no-brainer.

This year, there were only two projects. It was a much smaller number than the last two years, which should have made the judging easier. On the contrary, both projects were so well done, that me and my fellow judges, Shelly Villata and Ali Yousefi, had a very difficult time choosing a winner. Here’s a quick overview of the two projects, and the one we selected as the winner after a lot of deliberation. 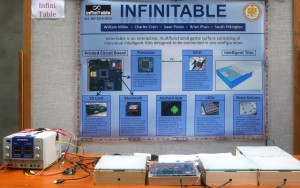 The first project presented was Infinitable. Infinitable is a multi-functional surface made up of tiles and LED strips to create an interactive and responsive experience. The tiles can respond to touch (or force) which activate the appropriate LED strips. They can also respond to music to create a rhythmic, visual experience. 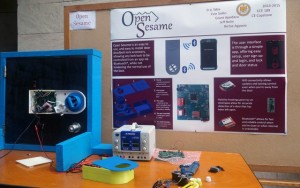 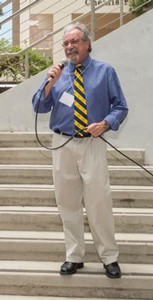 As in years past, both projects were very well done. The presentations were polished, and demonstrations of the project looked and worked great. I am always impressed by the amount of work these students are able to accomplish in such a short amount of time. In the 9 months that they have to complete the project, they come up with an idea, design the hardware, get the hardware manufactured (with significant help from Dr. Johnson), debug their hardware, develop the firmware for their boards, and build working prototypes. It’s thoroughly amazing what the students can get done with focus, determination, lack of sleep, and a lot of pizza.

As I mentioned before, both projects were worthy of the top prize. Having to pick one would mean that there was a winner and a loser, but that’s not fair. Given the quality of the projects, both teams won. The lessons learned, the hands-on experience, and the guidance they received has given all of these students a head start and prepared them well for the first job. Bottom line, Dr. Johnson does an outstanding job teaching and mentoring his students. It is a job that he takes very seriously, and one that he is perfectly suited for. Even though the students had to work hard to complete their projects, they are going to look back and appreciate what Dr. Johnson has taught them for years to come. I wish that I would have had the opportunity to take such a class when I was in school.

So, at the end of the day, we had to pick a winning time. Different from years past, we used all of our allotted time to pick a winner. We must have changed our minds almost a dozen times (at least it felt like I did), but in the end we chose the Open Sesame project. However, as I’ve said many times already, both projects were worthy of the top prize. If we could have split among both, we would have. It was that close of a call. 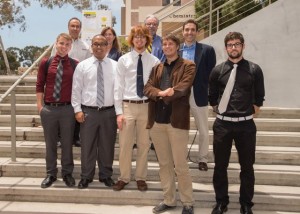 Note: All images contained in this article are compliments of the UCSB Department of Computer Science. You can see all of the pictures taken during Capstone Project Day by clicking here.