On June 13, 2015, Lisa, the family, and I traveled to Davis, CA for to watch our oldest graduate from college. It was nearly 19 years to the day when I graduated from UCLA with my MBA degree. Amanda’s graduation brought back memories of my graduation, and there was one particular moment from that ceremony that I will always remember.

I started the MBA program at UCLA in the fall of 1993, shortly after Amanda was born. Technically speaking, I was in the Fully Employed MBA program (aka FEMBA) as I chose to pursue my degree while working my full-time job at Vitesse. It was a long, hard three years balancing all of my responsibilities at the time, and graduation on the evening of June 14, 1996, was a welcome sight. Part of me couldn’t believe that I had made it through all of the readings, papers, tests and assignments. There were feelings of relief, although it hadn’t hit me yet just how time would free up without school. There was also a strong feeling of accomplishment. But one of the best moments occurred shortly after the ceremony finished.

The graduation was held on the UCLA campus in Dickson Court. They had asked those of us who had graduated to remain at the North end of Dickson Court while the crowd dispersed. For whatever reason, we were in a roped off area to keep us separated from the crowd. Lisa had come forward through the crowd and was standing just outside the ropes with Amanda, who was almost three at the time. As I turned and spotted them, Amanda’s face lit up, and she came running towards me. Luckily, she was small enough that she easily fit under the ropes. I knelt down as she reached me and gave her a huge hug. As I looked up, I could see Lisa preparing the camera. She took a picture that, to this day, is one of my favorite pictures of Amanda and me: 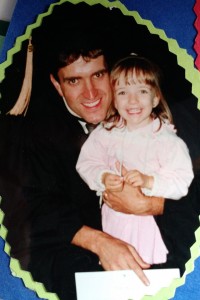 To see Amanda in her cap and gown 19 years later was a surreal moment for me. Now I was the one who was on the outside of the ropes. Throughout the ceremony, I could only imagine the excitement, relief and anticipation that she was feeling. When it was over, I couldn’t wait to see her and congratulate her on what she accomplished. It was a true “circle of life” moment, and I wanted her to know how happy I was for her, just as she was for me at my graudation. Here is the new picture that will compete for my favorite picture of Amanda and me: 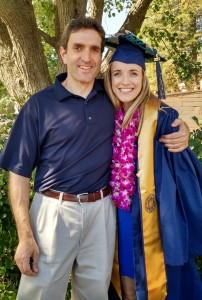 I’m happy for her and hope that she is proud of what she has accomplished. With graduation completed, she is ready to take the next step on her journey through life, which is starting a career. She’s still working on what exactly that will look like, but if she puts the same amount of effort into that step as she did into her college work, then I’m certain she’ll succeed. 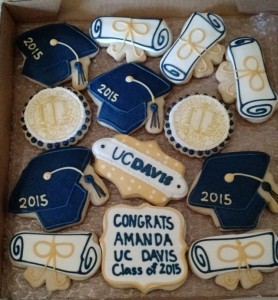