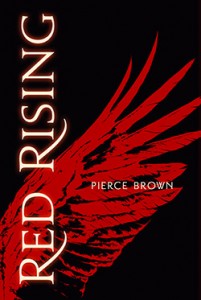 During lunch with a friend towards the end of last year, he mentioned how much he enjoyed reading Red Rising by Pierce Brown. Since recommendations from friends has become one of my top criteria for adding books to my reading list, I made sure that I put Red Rising at the top of my 2015 reading list.

As the website for the trilogy says, the book contains “…shades of The Hunger Games, Ender’s Game, and Game of Thrones….” I couldn’t think of a better analogy for the characters and plot. It’s a really strong effort for Brown’s debut novel. The characters are well developed and he does an excellent job keeping the story moving and the reader guessing as to what will happen next.

The story takes place some time in the future. Humans have ventured from Earth to colonize both the moon and Mars. A new breed of humans has emerged from the extraterrestrial colonies and has conquered Earth to emerge as the top power in the solar system. They have stratified society into colors with the most intelligent and dominant humans called Golds at the top of the pyramid. There are various other colors in the society – silver, copper, green, blue, pink, etc. (all the colors are described here) – but reds are the unskilled workers who are looked down upon as the lowest class of the society.

The book takes place on Mars. It is focused on a young Red named Darrow, who is part of a group of miners responsible for harvesting an element critical to the terraforming operations on Mars. Based on his ability, demeanor and background, Darrow is “chosen” by a group of Reds who want to rebel against the Golds to create a new world order. Darrow is genetically altered to look and act like a Gold so he can infiltrate their society and initiate the revolution. Darrow is challenged throughout the book to maintain his faux gold identity while remaining true to his humble upbringing. It’s a struggle that recurs throughout the story. Brown doesn’t an excellent job using Darrow’s predicament to his advantage to craft a captivating story.

I liked Red Rising, but I didn’t love it. The story was good and the futuristic dystopian setting appealed to me. While the technology was interesting, it was lacking in depth which is why the book fell a little short for me. In other words, the technology didn’t play a significant role in the book. It was secondary to the characters and the story.

My only other beef is that the book is the first of yet another trilogy. Trilogies seem to be all the rage these days, and I’m doing my best this year to focus on a variety of books and authors rather than investing time in specific series. I’ve added the follow-on, Golden Son, to my reading list, but I don’t expect that I will get to it this year. It will probably be a book I pick up in 2016.

While Red Rising isn’t going on my Must Read list, I would still recommend it as an entertaining read. I would put it in the same category as Brilliance, Wired and The 5th Wave. You’ll enjoy it, you’ll find it hard to put down, and you won’t be disappointed that you read it.