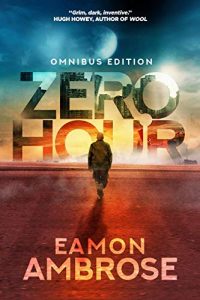 Zero Hour is a post apocalyptic glimpse into the future. It examines the consequences of an artificial general intelligence that goes into a runaway improvement state, meaning it becomes smarter at a faster and faster rate. It’s a condition often referred to as the technical singularity – the point at which machines become smarter than humans.

In Zero Hour, as with most predictions regarding the singularity, the future is not especially bright. The super-intelligent machine views humans as a threat that must be eradicated to preserve its existence. The story Ambrose weaves around the singularity event is well written. It packs plenty of action and is full of suspense. In addition to AI, Ambrose also explores other science fiction themes such as the transferring of human consciousness into and between machines. While the book can be a bit dark at times, there is an underlying message of human resilience and ingenuity as those remaining struggle to survive among the powerful AI and the machines that are under its control.

Zero Hour is a Must Read. I breezed through it over the course of a couple of evenings. Ambrose wrote the book in six separate novellas, which you can buy as an Omnibus edition. While you can try out the first book for less than a buck to see if you like it, my advice is to go straight for the whole enchilada. You won’t regret it.