I’ve always been a bit curious about the correlation between oil and gasoline prices. In other words, when oil goes up or down, how much and when do gasoline prices change.

Through an internet search, I was able to collect the monthly prices of both oil and gas from the U.S. Energy Information Administration. They have publicly available data on the price of gas that goes back to 1991, and for oil back to 1974. Below is the graph I created that shows how the price of oil (in red) against the price of gas (in blue) since 1991. 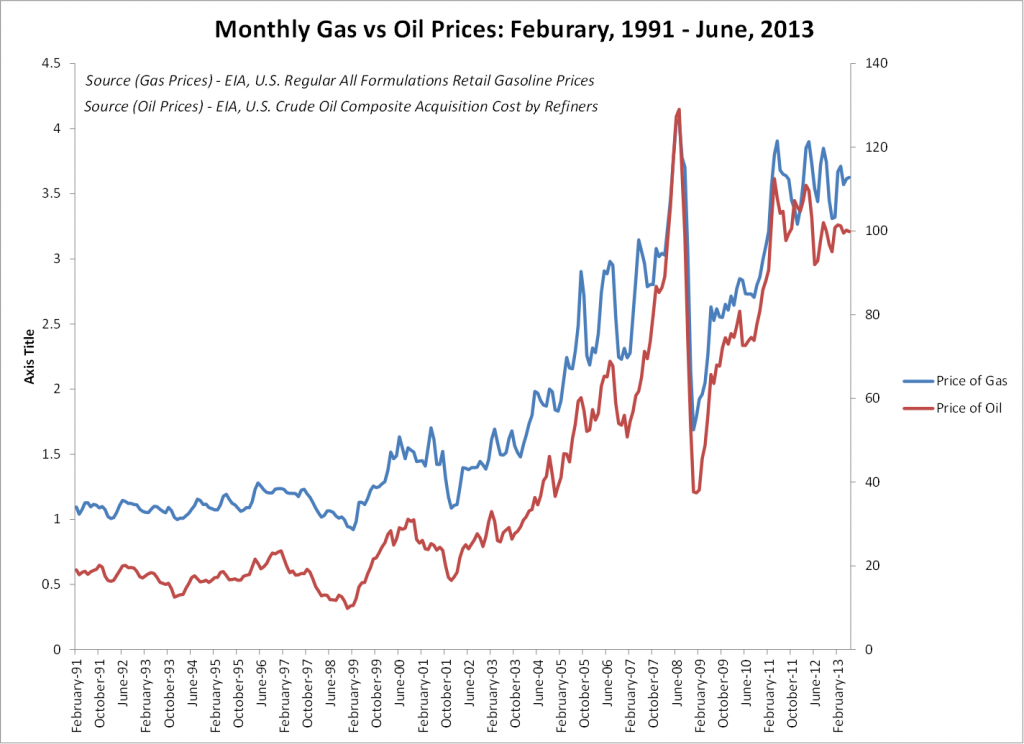 As you would expect, the prices track each other very closely. I did notice a few interesting items from the data:

My second fascination has been understanding how much influence the president has on the price of oil. The media would lead you to believe that the president has significant influence over oil prices. They also paint the Democratic Party as an enemy of the oil industry which puts downward pressure on prices, whereas the Republican Party is cozy with the oil industry and supports higher prices.

To check this hypothesis, I looked at the prices of oil and gas during the last three administrations – Clinton, Bush, and Obama. I identified the low, high, and average price of both oil and gasoline during their presidencies. Obviously, the data for Obama is not complete and only covers up to June 2013. Let’s take a peek at the data.

While there are fluctuations in prices during a president’s term, the overall trend appears to be governed by forces of supply, demand, and inflation, with occasional speculative events mixed in. My conclusion from the data: the president does not have much influence or control over the price of oil and gasoline despite what the media would lead us to believe.

1 thought on “Charting Oil and Gasoline prices since 1991”