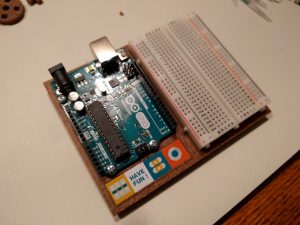 After judging the UCSB ECE Senior Capstone projects at the beginning of June, my fellow judges and Professor John Johnson had a spirited conversation about generating interest in STEM (Science, Technology, Engineering & Mathematics) subjects among younger students. One of the conclusions we came to is that students in late elementary thru high school aren’t exposed to enough hands-on electronics and computer classes. In order to get exposure, it requires parents to enroll their children in after school activities, which are dominated by athletics these days. We wondered if cost and complexity could be an issue, but Dr. Johnson brought up the Arduino Starter Kit he had been experimenting with. At under $75 on Amazon, he felt it was a great way to introduce electronics to young students. After our discussion, I decided to purchase an Arduino Starter Kit on Amazon.

Here’s a little more background on what the Arduino is, why I got one, my experience with it so far, and why it makes it a great learning vehicle.

What is an Arduino?

From the introduction at the Arduino website, it’s “an open-source prototyping platform based on easy-to-use hardware and software.” I’m not going to rehash everything from the introduction on their site, which I would encourage you to read, but there are a couple of points they make that capture the essence of the Arduino project.

For these reasons, I believe the Arduino makes for one of the best ways to introduce hardware and software concepts to a student, anywhere from late elementary school through high school and beyond. 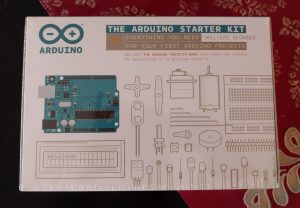 One of the best ways to get acquainted with the Arduino is this Starter Kit which you can buy from Amazon for under $75. There are two very nice things about this kit. 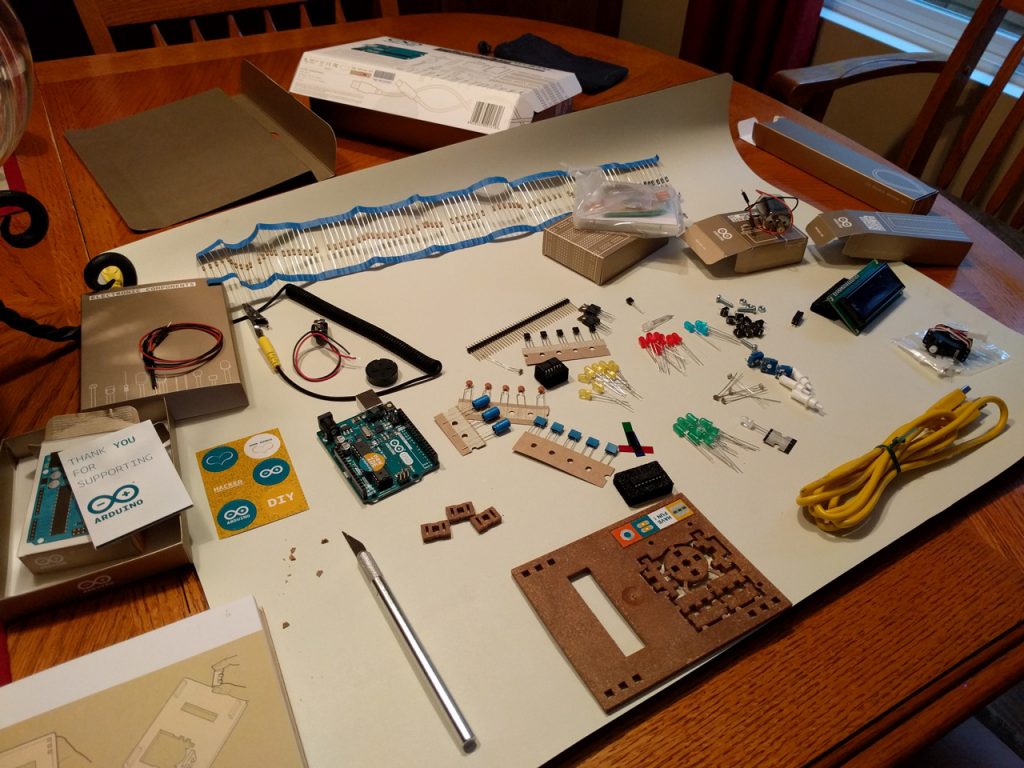 Why I got one

After our discussion with Dr. Johnson, I wanted to see if I could get my two younger daughters interested in playing around with the Arduino. One of the daughters just graduated high school and is considering a computer science major, so I figured this would let her see if it is something she would find interesting. For my youngest, she’s into crafts. To me, the Arduino is a craft kit on steroids. I liked the idea of being able to show her that she can create some really cool stuff with electronics that isn’t difficult to do.

I have to also confess that it was a way for me to relive my youth. Growing up, I have vivid memories of tinkering on a Commodore 64, writing BASIC programs on a Coleco ADAM (anyone else remember that computer???), learning to program in FORTRAN and COBOL on a TRS-80 in high school, and playing around on a friend’s Apple IIe after school. The look of the Arduino Starter Kit brought back all those memories, which I’d like to pass down to my kids. 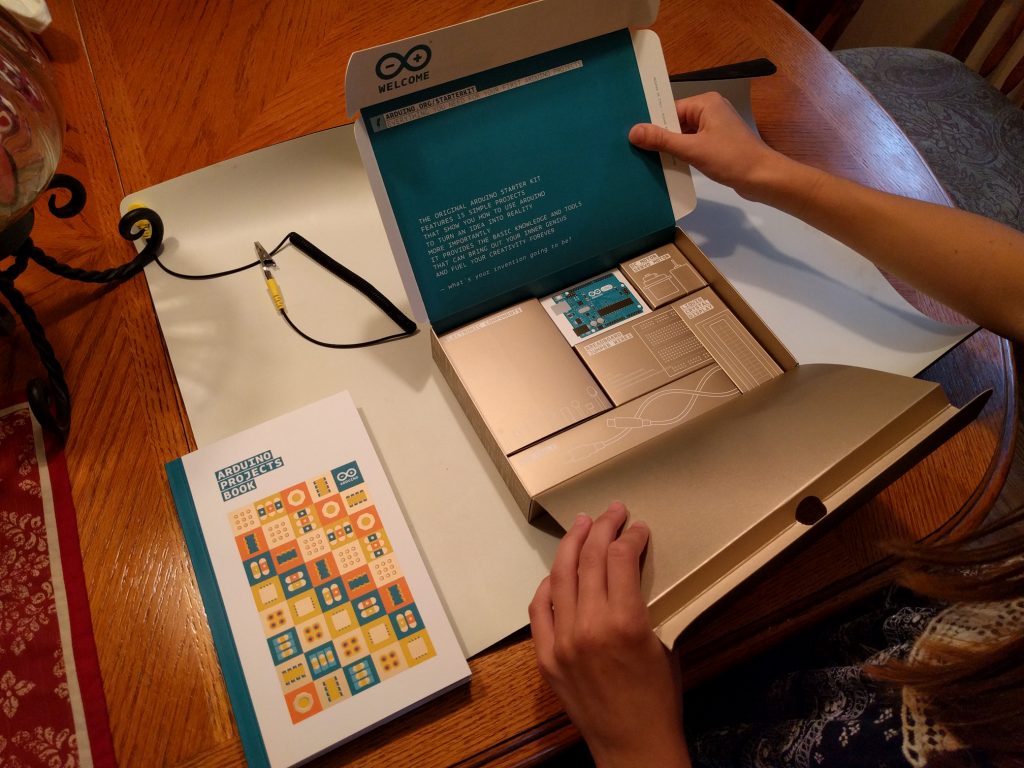 What makes the Arduino great

If you haven’t been able to tell thus far, I’m a big fan of the Arduino. I would highly recommend it to any parent who wants to expose their child to electronics and programming concepts. Here’s a list of the reasons why I think it’s great. 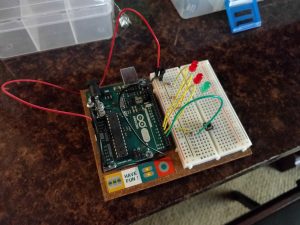 One of the first projects in the Arduino Starter Kit Project Book. It introduces basic concepts such as power, ground, flow of current, resistance, and using buttons to complete a circuit. My middle school aged daughter had no problem grasping the concepts of this project. 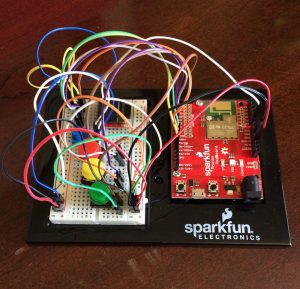 A friend of mine’s high school son created the project above. The red, yellow and green buttons are used to control an Android phone. The buttons can wake the phone up, start the phone’s music player, and mute the volume. Pretty impressive for a high school student, especially since it only took him a couple of days to complete. 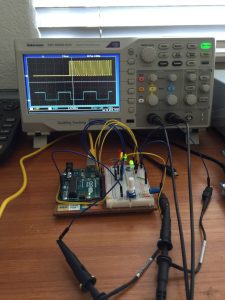 If you have the right tools, you can do all sorts of things with the Arduino. In the image above, Dr. Johnson is putting the Arduino through its paces and using a logic analyzer to study the results. So yes, even a knowledgeable expert in electronics can enjoy an Arduino.

In addition to the book included with the Arduino Starter kit, here are other online resources which have good information and more projects to build:

Jeremy Blum – https://youtu.be/fCxzA9_kg6s?list=PLA567CE235D39FA84. A YouTube channel with more projects that use the Arduino. Jeremy has additional background on his website if you’re interested in learning more.

A lot of Arduino articles I came across online also pointed to Jeremy’s book, Exploring Arduino: Tools and Techniques for Engineering Wizardry. I haven’t personally used the book, yet. It’s a resource I plan to pick-up after I exhaust the projects in the Starter Kit book and the projects on Jeremy’s YouTube channel.

If you haven’t already purchased an Arduino Starter Kit, click here to buy from Amazon.

I’ll wrap this up by reiterating what I’ve already said – the Arduino Starter Kit is one of the best ways, if not THE best way, to introduce a child to electronics and programming. My only disappointment is why they aren’t doing more with this in schools, from late elementary through high school. It would be an ideal way to generate interest in STEM classes, but that’s a topic I plan to explore deeper at another time.