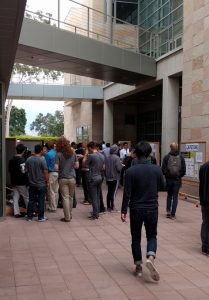 The projects also seem to get better every year, and this year’s projects were especially impressive. My good friend, Dr. John Johnson did a great job working with his students and preparing them for the presentation day. Even though I’ve never personally been to a tech incubator or accelerator “demo day”, my instinct tells me that the atmosphere is roughly equivalent.

I’m extremely grateful the Dr. Johnson invited me again this year. Here’s a brief synopsis of the projects, my overall thoughts on the projects, and who we picked as best project.

This year, there were eight projects, which is the most projects in the four years that I’ve been a judge. Three of the projects were interdisciplinary projects meaning they were a cooperation between multiple departments within the engineering school. It certainly made for some interesting projects, and quite a few that were extremely well done. Here is a brief overview of each project in the order they were presented.

(For more details on each project, including design review presentations, I encourage you to visit the ECE189 Class home page)

The day started with ChessMate, which is an interactive chess board. It tracks the pieces on the board and shows possible move when a player attempts to move a piece. It is designed for all levels of play, but I could easily see how it would be very useful for people who were just learning to play, or at a novice level.

SoilSmart is a system that optimizes the irrigation of crops based on the moisture level of the soil. It uses embedded moisture sensors in the ground that feed data back to controllers that handle the turning on and off of irrigation controls. It can also detect variations in pipe pressure which helps to detect leaks in piping. While it could be used for lawns, its primary application is for optimizing crop irrigation, which saves water and labor costs for farmers.

OstraCam is one of the interdisciplinary projects that was sponsored by Professor Todd Oakley, UCSB Department of Ecology, Evolution and Marine Biology. It is an underwater dual-camera system that is designed to capture the bioluminescent output of ostracods. The goal is to build a model of each emission that includes things such as position, intensity, salinity and other data that can be used to study the creature’s mating habits.

BULB is another interdisciplinary project done in conjunction with the electrical and mechanical engineering departments. It also had an industry sponsor, SONOS, which provided funding and guidance for the project. The project was a canister lighting enclosure that uses a SONOS Play1 as the speaker and includes an LED lighting ring around the speaker. The color and intensity of the light is controlled by an Android app. The BULB was well-built, and I wouldn’t be surprised to see a variation of it in the SONOS product line soon.

Yes, this is the same HyperLoop that is being funded by Elon Musk’s SpaceX. This project was another interdisciplinary effort that also had significant industry sponsorship. The ECE189 team built the control part that was responsible for the stability control and braking of the pod. The entire design was very impressive, and the overall project was selected as a finalist to test their pod at the Hawthorn HyperLoop Test Track later this year. I’d like to congratulate the team on their success thus far and wish them all the best at the test later this year.

dVA is a software project, one of the only projects that I’ve seen in the four years of judging that did not have a significant hardware component. dVA is short for Data Visualization and Analysis. It is a program for analyzing results from the testing of semiconductor wafers in order to identify highly correlated tests that can be eliminated in order to optimize test times.

HeartBuddy is a health monitoring system that is used to identify when a person requires assistance or emergency help. It tracks heart rate through a pulse monitor and tracks sudden changes in position through a gyroscope and accelerometer to recognize falls. It then uses GPS to identify a person’s position so assistance can be sent. It was an ambitious project, and while the team wasn’t able to complete everything they wanted, they did create a reasonable proof-of-concept.

DATA Suspension Systems is pretty much what it sounds like – a suspension system that detects obtacles in the road and adjusts a vehicle’s suspension based upon the obstacle. The system uses SONAR to detect height from the suspension to the road, and then adjusts the height through the use of air bags to raise or lower the vehicle height.

As I mentioned above, I’m always impressed by the amount of work the students are able to accomplish in just nine months time. I am also impressed by the both the quality of the finished projects and the presentations by the students. There are few common threads I’ve identified from my four years of judging.

Nothing great happens without passion

I’m convinced that great outcomes do not happen without passion. The students all exhibited a passion for their projects which was evident in the quality of the finished product. More importantly, Dr. Johnson’s passion is on display in each and every project. The amount of preparation he puts into the class, mentoring the students, and preparing them for the final project presentations is impressive. It shows, and without that passion, the projects would not be nearly as complete or impressive.

“Bridge between being a student & an engineer”

In his opening remarks, Dr. Johnson commented that the Capstone Senior Project is a “bridge between being a student & and engineer,” and I couldn’t agree more. The skills that these students learn are invaluable, and more than they could ever learn in a classroom setting. Getting hands-on experience working with both hardware and software, along with the guidance they get from Dr. Johnson and his TA (who was Will Miller this year), will serve these students for years to come in their engineering careers.

Everyone is a winner

I know it will sound silly, but every one who participates in the Capstone Senior Project is a winner. As I just mentioned, the experience and guidance they receive is irreplaceable. No matter which team is declared the winner of the best project prize, they all gain experience that will make them valuable additions to anyone’s engineering team. I also wouldn’t be surprised if some of the students end up venturing out on their and starting their own company some day.

Even though everyone wins, my fellow judges, Ali Yousefi and Shelly Villata, and I were tasked with picking a best project. The criteria for selecting best project were concept, implementation, and presentation. With so many great projects, it was a tough decision, as it is every year. However, this year, the decision difficulty was taken to another level.

After a lot of deliberation, we settled on SoilSmart as this year’s best project. It was truly a tough decision as the projects from Chessmate, HyperLoop, BULB and OstraCam could have all made a case for being selected. Unfortunately, in the end, there can only be one.

In closing, I’d like to extend a special thanks to Dr. John Johnson for inviting me to be a judge for a fourth straight year. I always enjoy seeing the project presentations and what the students have done over the course of the year. Dr. Johnson and his TA, Will Miller, did a fantastic job mentoring this year’s students. I’d like to commend both of them for a job extremely well done.