Overall, I’m fairly pleased. Just the fact that I’ve kept it at for longer than a month or two is more than can be said of 95% of the blogs that are started. I would like to post more, but I’m still working at becoming a more prolific writer. Believe me, it’s not a lack of topics that’s holding me back. I have a backlog of approximately 75 items. In other words, having something to write about it isn’t a problem. As those who know me can attest, I have (too) many opinions on way too many diverse topics.

Google Analytics is an amazing tool. I feel like I know it pretty good, and I’m still learning more every time I dig into it. I’ve been using it to track traffic on the site since inception.

When I ran the stats from the start of the blog on November 1, 2012 through December 31, 2016, it revealed that I’ve almost hit 100K sessions on my site. It looks like I’ll surpass the mark in January of 2017 if current traffic patterns hold. 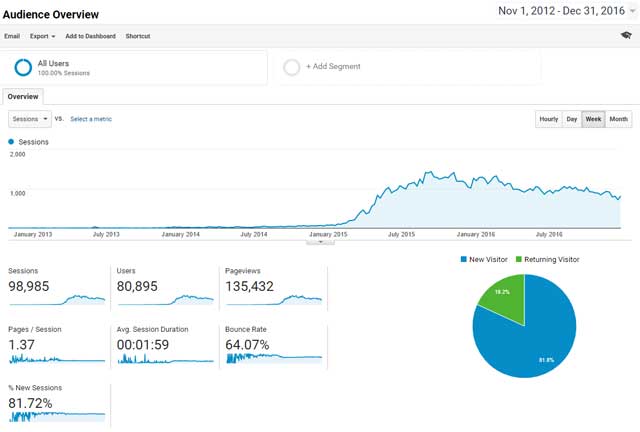 What’s interesting about the traffic since inception is that the first two years were very, very light when it came to traffic. Then I wrote a post to document how I setup a router to extend my network so I could remember how to do it. That post still gets thousands of views per month and dominates my blog traffic as you’ll see below.

The traffic in 2016 was fairly constant through the year, although I’ve noticed the traffic has been slowly declining. I wouldn’t be surprised if the decline accelerates during 2017 as the post to setup my router becomes more and more dated. At some point, it’s not going to be as useful as it was when first published. 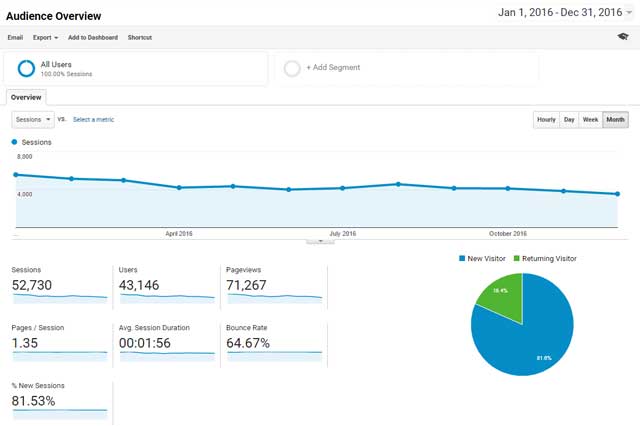 Perhaps this graph which shows the traffic on a monthly basis for each year gives a better indication of the traffic trends. 2015 was an increasing trend line while 2016 is moving in the opposite direction as the year progresses. 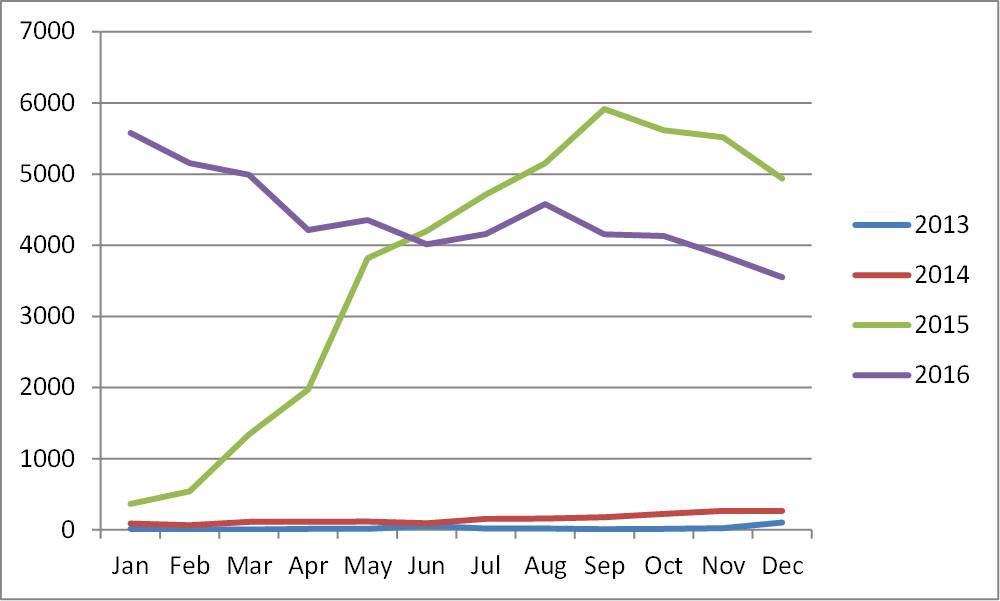 Since I’m not keeping a blog to generate traffic, I’m not concerned about the trends. It’s more for information and learning purposes.

On a monthly basis I started strong, but I had quite a few low months. The worst was October, where I only managed a total of one post.

I’ve compiled three lists to show the most popular posts on the blog.

I would expect a couple of things could happen on these lists over time. First, some posts from 2016 may eventually show up on the popular post list on an annual basis. Second, the divergence between the most popular on an annual basis and most popular since inception will grow. What I’ve learned thus far from blogging is that consistent content generation is key to generating traffic. You don’t know which posts will be popular. Furthermore, topical posts generate temporary traffic whereas unique, knowledge posts generate longer lasting, long-tail organic Google search engine traffic.

If you’re going to make goals, then you have to measure your progress against them. Here’s the results of my goals from 2016.

Needless to say, I didn’t make much progress on my goals for 2016. Unfortunate – yes. Disappointing – no. So long as I’m keeping up with the blog it’s a successful year. I’m still going to set some lofty goals for 2017 that I’d like to accomplish.

My goals for 2017 aren’t a whole lot different than what they were for 2016. Hopefully, I’ll make more progress during this year.

As I wrap up 2016, it’s been another good year. I may not have reached any of my desired 2016 goals, but I’m just happy that I kept at it for another year. As I’ve mentioned before, I’m treating this blog as my public journal, a way to control what the internet displays about me, and as a legacy to my current and future generations.

Bottom line, so long as I continue to consistently post in 2017, it will be a great year regardless of how many of my stated goals I am able to accomplish.