2014 wraps up my second full year of running my personal blog. Overall, I’m happy that I’ve been able to maintain the blog and consistently post content. One of my biggest worries starting a blog was that I would stop posting. I’m confident that I’ve overcome that hurdle, so now I can focus on other goals for 2015.

With book reviews taking 6 of the top 10 spots, it’s pretty clear what content resonates with Google Search. Also, the reviews have a “timeless” nature to them in that a few of those reviews were written in 2013.

For the most part, I’m not going to let the popularity of content drive what I write. There are other things that drive the content of the blog which you can read about here. It’s just interesting to do the analysis and see what content is generating pageviews.

For the year, the blog had almost 1,850 sessions. That an increase of 6x over 2013 when the site had just over 300 sessions. The traffic has steadily increased throughout the year with this past December having almost as many sessions as the entire year of 2013.

The traffic increase reinforces some lessons I learned last year. First of all, you have to just do it. If you think about writing too much and over analyze, you end up not writing anything. Second, persistence is key. The more content you generate, particularly unique content, the better chances you have for Google to index your content and for users to find it. Finally, write for your own purposes and the audience you define. Don’t write for SEO, and don’t write to get famous. If your content is strong, search engines will index it and people will find it. Forcing it is not a strategy that will work for the long-term

For comparison purposes, here’s the 2013 traffic chart. I don’t really think there are any extremely meaningful changes to take from the two charts except for the traffic increase which I directly attribute to staying persistent and consistent with posting to the blog. 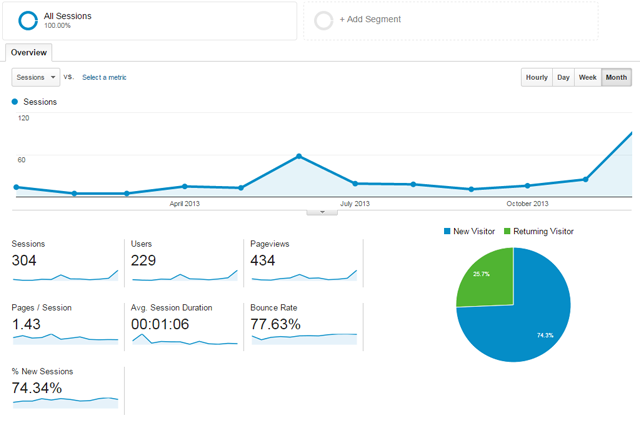 I’ve found that the best way to drive behaviors you want is to write down and document your goals. For 2015, I’ve set three goals for the blog.

I’ve been pleased with the performance of the site for 2014. Now that I’ve put forth some concrete, written goals, the blog should only improve. I’m looking forward to what 2015 has in store for the site!