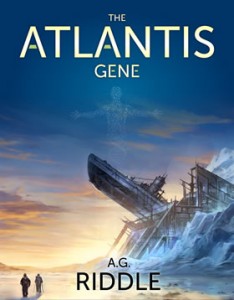 The Amazon recommendation engine contains a bottomless pit of suggestions, especially after you fill it up with enough purchases. Since I’ve been on a reading binge this year, the book recommendations have been coming faster than ever, and they’ve gotten better (which is why I “hate” the engine). One of the latest recommendations I received was for The Atlantis Gene by A.G. Riddle. It was the trifecta of Amazon recommendations – the description looked interesting, it had received an overwhelming number of positive reviews, and I could borrow it through the Kindle lending library. Obviously, I loaded it up.

Riddle doesn’t mess around in The Atlantis Gene. The story starts moving immediately, and you are left trying to catch up and piece together what is going on. All the while, Riddle keeps moving the story forward, and quickly at that.

In a nutshell, the story starts in Southeast Asia where a doctor, Kate Warner, is experimenting with children on a cure for autism. She appears to be onto something when her lab is disrupted by an entity, the Immari, that is apparently trying to subvert the existing world order.

The disruption causes Dr. Warner’s path to cross with Agent David Vale, who has been at work trying to identify and stop the Immari. Eventually, the two recognize that they are key to each other’s survival. Furthermore, they discover that they could be the key to preventing a planned genocide. These form the basis for the story, and you are taken on an action-packed adventure across multiple continents. It was another one of those stories that I had a hard time putting down and led to a couple of late night readings.

I thoroughly enjoyed The Atlantis Gene. Riddle does a great job of writing a fast-paced adventure. Although it seems disconnected at first, he does a great job back-filling and weaving in details as the story unfolds. It made for lots of “a-ha” moments throughout the book, which I liked. It also keeps you engaged and wanting to get to the next story reveal.

Another piece I really enjoyed was how Riddle intertwines historical facts around human evolution and societal progression into the story. He also mixes in some near-term science fiction concepts about the progression of technology and its impact on humanity. It really engaged my imagination and makes you think about how humanity has gotten to where it is today, along with where it is headed. One of the best parts is that Riddle puts an epilogue at the end of the book that points out which pieces of the story are based on historical fact (with references) and which are things he embellished or made up in the interest of the story.

Admittedly, the story does slow down a bit in the center, but it’s necessary for plot development. Riddle has to fill in a number of holes that he creates through the action-packed beginning and provide a foundation for the ending. As with the beginning, the ending moves quickly. Without providing a foundation in the middle of the book, it would have slowed down the ending, or worse yet, made it feel disjointed.