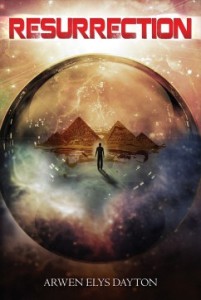 Because I’ve been reading a lot of science fiction, Resurrection by Arwen Elys Dayton was recommended by my nemesis – the Amazon recommendation engine. After reading the synopsis and checking out the reviews, I decided to add it to my never-ending reading list. Shortly thereafter, it was featured as a Kindle Daily Deal. I went ahead and added it my library, and then moved it up in this year’s reading list.

Thousands of years later, the Kinleys need to return to Earth to see if they can locate the remnants and any possible survivors of the mission. Why? They want to get access to an advanced technology called The Eschless Funnel that their ancestors used to travel to Earth. The Kinleys and Luciens have been at war for thousands of years, and the Kinleys need The Eschless Funnel to gain a permanent advantage over their enemy.

The book has a good mix of science fiction, action and adventure. Dayton also weaves in how the influences of advanced alien technology could explain the mysteries of ancient Egypt, such as the pyramids. She also explores many facets of human nature, like the ways power can influence and corrupt behavior, and how differences in appearance and culture inhibit the ability of different races to work together for the collective common good. It’s a book that will tickle your imagination with its sci-fi technology and also leave you pondering the flaws of human nature.

Overall, I liked the book, but it isn’t a must read for me. I feel like Dayton extended herself and tried to do a little too much with the book. There are points where she has five story arcs active at the same time. It made it challenging to follow the plot at certain points, and having so many arcs active made it difficult for Dayton to explore each arc to its fullest. It also had the effect of making the first two-thirds of the book move a little slow. As she starts bringing the arcs together, the last third of the book becomes a fast-paced thriller. In other words, I struggled to get through the first two-thirds, but found it hard to put down after that.

I would put Resurrection in the same class as books like Brilliance, Wired and The 5th Wave. In other words, you won’t be disappointed, and you’ll certainly be entertained.