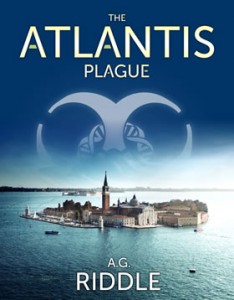 While browsing for my next read, I noticed that The Atlantis Plague by A.G. Riddle was available. Since I liked The Atlantis Gene a lot, I figured the sequel would be worth reading. The reviews were overwhelmingly positive, and it didn’t hurt that I could “borrow” it from the Kindle lending library. That was an added bonus.

I must preface this review by stating that you have to read The Atlantis Gene before picking up The Atlantis Plague. Even having read The Atlantis Gene, I started out the sequel feeling a bit lost. It took a few chapters to recall all the characters and events from the first book. Luckily, Riddle helps you catch up by throwing in a few extra details, but you have to have read the first book to understand the references he makes. If you haven’t read it, you’ll be completely lost and miss out on the overall story, The Origin Mystery. Don’t worry though, reading the first book is totally worth it.

The story in The Atlantis Plague picks up where The Atlantis Gene left off. All of the familiar characters are there, Dr. Kate Warner, David Vale, Dorian Sloane, and Dr. Martin Grey. As with the first book, Riddle doesn’t waste anytime jumping into the story. Right away, you’re trying to figure out what is going on, where the story is heading, and trying to remember details from the first book. The action is fast paced, so fast that you’ll have a hard time putting the book down. I found myself breezing through chapters, which are easy to get through since Riddle keeps them nice and short for the most part.

Just as he did in The Atlantis Gene, Riddle weaves in historical facts as the characters jump from continent to continent on their adventure. The facts build upon the Origin Mystery that Riddle introduced in The Atlantis Gene. It’s what I would consider the primary story arc of the series. There are other story arcs woven through the book, and Riddle does a master job of bringing them all together at the end. In fact, it made for a quick, entertaining read over a few nights.

My only disappointment was the ending. Riddle could have finished the story, but instead he intentionally left an opening for adding to it. While I understand his motivation for wanting to be able to continue the series, I would have preferred a clean ending. I’m growing a bit tired of sequels and extended series, but who knows. I may feel different after Riddle’s next entry in The Origin Mystery Series.

Overall, the ending to the book is a personal nitpick, and it shouldn’t deter you from reading it. The Atlantis Plague is clearly in my collection of Must Reads. I thoroughly enjoyed both books and enjoy Riddle’s writing style. There’s lots of action in his stories, and he leaves out just enough details to keep you guessing as to what will happen or what he will reveal next. He also mixes in plot twists, historical facts, or hard science fiction that stretches your imagination. I have to admit, that the lead up to the ending of The Atlantis Plague effectively “blew my mind”. When a book is able to do that, you know that the writing is good.

On a personal note, I’ve spent the past few months catching up on reviews of books I’ve read during 2013 and the latter part of 2012. With this review, I’ve finally exhausted my backlog and from here on out will publish book reviews as I finish them. If you’d like to see all of the books in my “must read” category, you can click here, or on the tag “Must Reads” in the footer. In addition, within the next week I intend to publish a list of must reads for the next year as well as a sampling of the books that I plan to read in 2014. If you have any suggestions for my 2014 wish list, feel free to leave them in the comments.