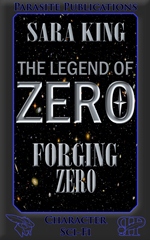 Since my last two reads, Dust and The Last Firewall, were books from a series I was very familiar with (and liked a lot), I decided it was time to start something new. Forging Zero by Sara King had been on my wish list for a while, so I figured it was worth a shot.

The premise of the story is built around Earth falling under alien control. The aliens draft the planet’s children into their army by kidnapping them. The children they choose are all under the age of 10, except for a few older “recruits” in the early teens who are chosen as a means to demonstrate to the younger ones what happens if you step out of line. Only one of these older recruits survives, a fourteen year old named Joe Dobbs. When the children are numbered by the aliens for tracking, he is given the number zero, which becomes his nickname.

From there, the story focuses on their trek from Earth to the alien planet that serves as their training ground. Throughout the training, King expands on the characters as they are hardened into soldiers. The book is an interesting study of human motives, our drive to survive, our need to be rewarded, and our desire to be accepted by our peers. Eventually, a series of events that are foreshadowed throughout the story (and that I won’t spoil) take place forcing Joe to step forward and develop into the leader that he is destined to become. His nickname Zero, combined with the events of the story, make the name of the book, Forging Zero, a great choice.

The development of the environment and the characters are the strong suits of this book. King spends a lot of time creating an alien world that can be taken forward into future stories, which she has through the series The Legend of Zero. She also spends a lot of time describing the characters to help you develop an emotional attachment to them. As I found out in the afterword, It turns out to be the goal of the publisher, Parasite Publications. As they put it:

…we want to produce memorable, sympathetic characters that reader will still be thinking about years after finishing our books.

Overall, Forging Zero is well written and a good story, but I wouldn’t put it in my must read category. The story drags a bit, and it takes a while to learn the slang, euphemisms, alien types, and technical terms that King uses throughout the book. Many times, I found myself unsure of a term or phrase, but I didn’t want to go back and try to find it to understand the meaning. Eventually, by the second half of the book, I was comfortable with the environment that King created, but it made the beginning of the book hard to get through. In fact, it was one of the few times that I considered putting a book aside and starting something new. I’m glad I didn’t, because it was worth finishing.

Bottom line, if you’re looking for an interesting sci-fi book that is focused more on the characters than the technology, then Forging Zero would be a good book to pick up. Since I like a more balanced approach that engages my imagination through the technology, I’m planning to move onto to a different series and away from The Legend of Zero.