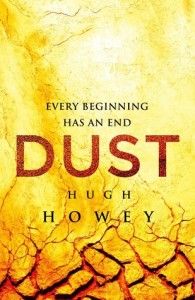 After finishing Shift, I had to wait almost seven months for Hugh Howey to finish the conclusion to his Silo series, Dust. It was a long seven months, but it was worth the wait. Dust is just as good as Wool and Shift, and Howey brings the Silo story to an end that fills in the holes and questions that were raised in the first two books. It should go without saying that if you read the first two books, you’ll want to pick up Dust.

I found the entire Silo series to be very entertaining. Howey is a masterful story teller. His descriptions of the Silo environment are well done to the point that you feel like you are inside them. The development of the characters is so deep that you feel a strong connection to their plight and pull for them to succeed or fail, depending on their motives.

I wish I could share more details on the story in Dust, but I don’t want to spoil it, especially if you are working your way through one of the first two books. I would just encourage you to keep reading. You’ll be rewarded with a satisfying ending.

Obviously, it goes without saying that Dust is in my must read category of books. I enjoyed the series so much that I’m looking to pick up some other works by Howey to see if they match the same level of quality as the Silo series. Right now, I’m considering picking up the Molly Fyde series, but I have a lot of things queued up on the Wish List, so I’m not sure when I’ll get to it. At the rate I’m currently adding things to my Wish List, it’s going to be a while!