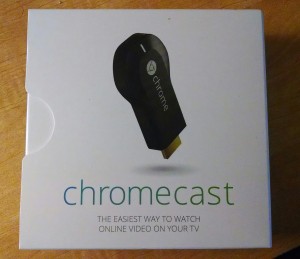 I’ve been wanting to check out Google’s Chromecast since it came out. Thanksgiving night, I noticed that Amazon was selling it for $30 with a $6 Google Play credit making the effective price $24. The deal was too good to pass up. I went for it. I’ll admit that it was an impulse purchase, but I’ve impulse bought worse. Much worse, and for a lot more money.

Thanks to the magic of Amazon Prime, the Chromecast arrived in Saturday’s mail. Don’t ask me how Amazon does it. Jeff Bezos must be practicing some kind of voodoo magic over there. As an aside, an Amazon Prime membership is the cheapest $80/year you’ll spend. Free two-day shipping, access to free streaming of hundreds of movies and TV shows, the Kindle lending library. It doesn’t get any better. Anyway, i digress – back to Chromecast.

The amount of time it took to go from out of the box to operational was ridiculous, in a good way. In fact, I think I spent more time figuring out which port to plug it into in my receiver and where to plug it in than I did setting it up. Here’s how easy it is:

It is very easy to stream content through Chromecast. Simply load up any Chromecast enabled app, look for the Chromecast symbol (see picture right), and press it. You’ll be asked to connect to the name you gave the Chromecast app, and then you’re in business. Anything you select through the app will be played on the TV.

Trust me, this is simple to setup and easy to use.

Chromecast is effectively a poor man’s Apple TV or Roku box. If you already have one of those, you don’t need it. In fact, given the relatively few apps that are available, you’ll probably find that it’s a step back, especially from Apple TV. The biggest drawback is the difficulty streaming content (music, video and photos) from your home network.

On the other hand, if you don’t have a streaming media box connected to your TV, Chromecast is the best bang for your buck. I’d highly recommend it and don’t regret making the impulse buy. I also believe that if Google keeps giving it a little love, like adding more apps and content streaming from your home network, then Chromecast has the ability to be a killer device, especially at a price point of under $40.