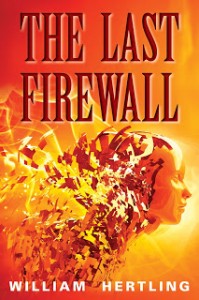 Having read Avogadro Corp. and A.I. Apocalypse, the first two books in the Singularity Series, it was with great excitement that I picked up The Last Firewall by William Hertling. I wasn’t disappointed. I highly recommend it, especially if you’ve read the first two books.

Hertling does a great job in The Last Firewall of building upon the story arc he introduced and developed in the first two books. In particular, I like how he ties all three books together through the characters and the technology. It would be possible to read The Last Firewall without picking up the first two books, but I wouldn’t recommend it. The story won’t make as much sense, the technology won’t be as believable, and the characters won’t be as deep. To get the most of out of the series, you need to read all three in order starting with Avogadro Corp.

As with A.I. Apocalypse, Hertling doesn’t waste time in The Last Firewall – the action starts immediately. You are quickly introduced to the story’s protagonist, Catherine Matthews, a nineteen year old with a neural implant who has a unique ability to manipulate the net. Her unique ability makes her somewhat of an outcast among her friends, and after wandering into some unsuspected trouble, she’s on the lam. She ends up bumping into a rogue A.I. over the net that considers her a threat to its plan to create a society controlled by the machines, not by humans. In time, Catherine becomes the last firewall between the rogue A.I. and its quest for world domination.

She is aided in her quest by familiar characters Mike and Leon, who are the main characters from the first two books in the series. They are employed by the Institute of Ethics whose job it is to ensure that humans and the machines live in harmony. Since they were the masterminds behind the creation of A.I. in the first place, it makes sense that they are the ones trying to utilize Catherine’s ability to subvert the rogue A.I.’s plan. Their dilemma is to make it across a country thrown into disarray by the rogue A.I. and make contact with Catherine before she ends up under its control. The story is packed with both action and technology that will stimulate your imagination and keep you engaged for hours.

If you’ve the read first two books in the Singularity Series, then picking up The Last Firewall is a no brainer. It’s clearly in my must read category of books, and I’d recommend it even if you haven’t read the first two books in the series. I thoroughly enjoyed it and really liked how Hertling developed the artificial intelligence and machine learning technology not only in this book but also throughout the series. He describes and builds upon it in a way that makes it both understandable and believable, so much so that it can be a bit unsettling and scary at times. He also challenges you to consider the issues surrounding the control and ethics of artificial intelligence technology that will surely crop up as the machines around us become more autonomous and intelligent than their human creators. Even if it’s a future we don’t want, it’s one that’s coming, whether we like it or not.