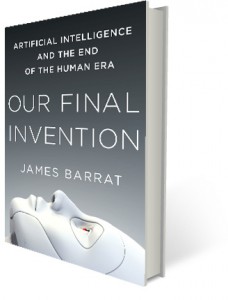 I’ve been making progress on my 2014 reading list, already having completed the first five titles. I was hoping to stay disciplined and stick to the list, but a recommendation I got from William Hertling dashed those hopes.  Hertling is the author of The Singularity Series, which is one of my favorite book series (see my reviews here and here). Needless to say, when one of your favorite writers recommends a book, it gets priority and jumps the queue. He suggested I read Our Final Invention: Artificial Intelligence and the End of the Human Era by James Barrat.

Our Final Invention is a non-fiction work written in the style of a documentary. Barrat interviews a number of the leading minds working on artificial intelligence (AI) in order to chronicle the evolution and future of AI. More importantly, Barrat spends the majority of the book looking at how we might arrive at two distinct AI points. The first is Artificial General Intelligence (AGI), which is when a machine will be as intelligent as a human. The second is Artificial Super Intelligence (ASI), which is the point at which a machine is orders of magnitude more intelligent than a human.

Barrat does not make any predictions on when these points will occur, except to say that it is not a matter of if, but when. His interviews point out that AI techniques and research are advancing at such a rapid rate that it would not be out of the question for AGI, or the singularity, to occur within the next 10-15 years. From there, he discusses a number of scenarios where a leap from AGI to ASI could occur quickly, potentially leaving us at the mercy of the machines.

Barrat’s concern is that we may achieve the goal of ASI without having built in the proper safeguards to create a “friendly” version of ASI, or a way where we can control or stop its development. Without the intrinsic means to protect ourselves from the machines, Barrat raises the concern that we could be slaves, or more comically, pets, for the machines. In the worst case scenario, he points out that machines may consume humans in order to access our matter and molecules to ruthlessly achieve their programmed goals and objectives.

After reading Hertling’s Singularity Series, Our Final Invention is an awakening to the perils of artificial intelligence. In fact, some of the scenarios are so closely linked to Hertling’s trilogy that it felt as though the two worked together on both projects with one big difference. Hertling’s work is fictional, whereas Barrat’s work is not. Barrat is not trying to simply entertain with his book. He is trying to raise awareness regarding the risk of unsupervised development of AI.

While I appreciate his concern, his work triggered deeper thinking about what artificial intelligence is and how we might achieve it. More specifically, I came away with a few questions that have left me baffled and without answers.

I found Our Final Invention to be a thought provoking read. It raised more questions for me than it answered, but it also made me aware that the discussions about how we monitor and control the development of AI need to happen now, not after levels of AGI, and possibly ASI, have been achieved. We need to make decisions on how we, collectively as a human race, are going to implement safeguards to insure that we don’t become a machine’s pet, or worse yet, an input they must consume to achieve their goal.

I’d like to thank William Hertling for recommending Our Final Invention to me.

3 thoughts on “Book review: Our Final Invention – Artificial Intelligence and the End of the Human Era”