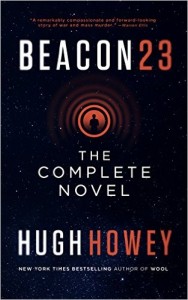 Make no mistake about it, I’m a big fan of Hugh Howey’s writing. I was captivated by the Silo Series and made the mistake of reading it while he was writing it. After reading Wool and Shift, it was a long painful wait for Dust to become available.

My next Hugh Howey adventure was Sand, which I had low expectations for. I mean, how could a story about people living in dirt be interesting? Somehow, he made it captivating.

When I saw that Howey released Beacon 23, something told me that I had to pick it up. To paraphrase the Amazon description, Beacon 23 is about the operator of a space beacon in the 23rd century. These space beacons are analogous to lighthouses, and a network of them has been placed in space to allow ships to travel across the Milky Way at many times the speed of light. This far in the future, you would think that the beacons would be autonomous. Turns out they need human intervention to make sure they stay operational.

Like Sand, you would think a story about a solitary beacon operator stranded in space would be as exciting as watching grass grow. But in typical Hugh Howey fashion, he spins a yarn that connects you to the main character and describes the environment is such vivid detail that you feel like you are on the beacon with him. It keeps you entertained and on the edge of your seat.

Having read three complete Hugh Howey works, it’s safe to say that he has a gift as a storyteller. He’s able to pull you into the story by thoroughly engaging your imagination to visualize the environment where the story takes place. What’s amazing is how he does it. He doesn’t waste words over-describing the backdrops for the story. Instead, he weaves it into the emotions and feelings of his characters. With each of Howey’s books, it’s this connection between the characters and their environment that has drawn me deeply into each story.

With Beacon 23, Howey makes you embrace the intense feeling of loneliness that comes from being isolated in a tin can in space, millions (possibly billions) of miles from the nearest human. It’s easy to relate to the introspection and inner thoughts that the primary character experiences, and it’s easy to relate to the conundrums he gets himself into. Some of the problems seem silly until you recognize that as humans what we really want is to be connected and accepted by others. Howey does a great job showing how that longing can be exploited for both evil and good purposes.

As with other Howey books, Beacon 23 is a must read. I would put it right up these with the Silo Series and Sand. It’s an enjoyable, fun and fast read. If you’ve read these books, I’m certain you’ll enjoy Beacon 23. And if you haven’t read any of these, you’re missing out.