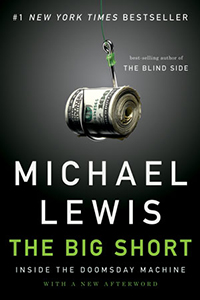 When I was putting together my reading list for last year, the movie The Big Short was just hitting the theaters. It had a great cast which included Christian Bale, Brad Pitt, Steve Carrell, and Ryan Gosling. I had heard about the book and knew it was written by Michael Lewis. I had been wanting to read another one of his books ever since I read The Blind Side, which, by the way, is much, much better than the movie. Anyway, I wasn’t sold on adding it to my 2016 reading list until I read a post from Brad Feld where he raved about how well the movie portrayed the events of the book. It was a done deal after that, and it finally bubbled to the top of my list within the last month or so.

In the book, Michael Lewis documents the events that led to the financial upheaval that occurred in 2008 because of the collapse of the housing market. He shows how banks created a profit machine making predatory loans to unqualified buyers, which were termed sub-prime loans by the industry. In order to reduce their risk on these sub-prime loans, the banks bundled these loans into packages that were sold to investors. Based on the number of bundled loans and how the payouts were structured, it was believed the financial instruments were sound. They were believed to be so sound that the both of the major rating agencies, S&P and Moody’s, gave the financial instruments multiple ‘A’ grade ratings.

He then details how a couple of astute hedge fund managers spotted the poor underlying fundamentals in the loans and their associated debt instruments. These fund managers bet that these instruments would self-destruct and bet against them over multiple years. Ultimately, they made a fortune when the market imploded, and the book reveals the tension between their desire to be right and their realization of the consequences of what being right meant. Effectively, it meant the potential collapse of the global finance system, which nearly happened during 2008-2009.

In telling the story, Lewis gets very technical at times describing how the debt instruments were structured and how these fund managers placed their bets against them. I didn’t totally understand the mechanics behind the derivatives, but I get that it was necessary to explain just how complex and messed up the situation was from 2005-2008. It also explains the parts both greed and stupidity played in the market collapse.

For anyone who wants to understand the events that led up to the market collapse in 2008, the book is a must read. It also underscore just how fragile our financial system is, and how unregulated it can be. It’s hard to believe that the laws of that time, or lack thereof, let Wall Street bankers take advantage of the common person to enrich themselves. It’s even more absurd that the government bailed out the companies that created thee massive Ponzi schemes that imploded while the sub-prime borrowers were left holding the bag. It took years for the government to step in and offer relief to those taken advantage of.

After reading the book, I was both shocked and somewhat disappointed that we, as a sociaety, rewarded the predatory behavior that occurred during the housing bubble. I get that their actions may not have been illegal by the letter of the law, but it was clearly unethical. As my late grandfather liked to say,  “the only difference between what Wall Street did and Jesse James did, is that Jesse James had a gun.” It’s a shame that laws and controls need to be put in place to mitigate the behavior of people who should really know better.

I would hope the events that unfolded and led to the collapse of the market in 2008 wouldn’t happen again in my lifetime, but something tells me it will. As Brad Feld said in his post that I referenced above, reading The Big Short (or seeing the movie) makes you wonder what things are happening today that no one sees.

While a bubble might not be happening around real estate, I could definitely see it happening again in some other market. And at the end of the day, it shouldn’t be a surprise to anyone given human nature being what it is. Greed seems to always win out over doing the right thing.

Due to the technical nature of the book, I’m not going to put The Big Short in my Must Read category, but I would highly recommend it if you’re interested in the story behind the housing market collapse. It will certainly curl your hair and make you wonder.

If you’re more of a movie person than a book person, here’s the trailer for the screen adaptation. I haven’t seen it myself, but it’s supposed to be pretty good.