The college football bowl season, or what I like to call the “football silly season”, is underway. How silly are the games? Even star, NFL-caliber players are realizing that risking a future career in the NFL and their earning potential is not worth playing one more meaningless game.

What college football needs is more games with meaning. When I see NCAA president Mark Emmert say that he would like to see the college football playoff expand to eight teams, my quick response is, “So do I!” I’m so serious about my desire for an expanded playoff that I put together my proposed bracket based upon the final CFP rankings. 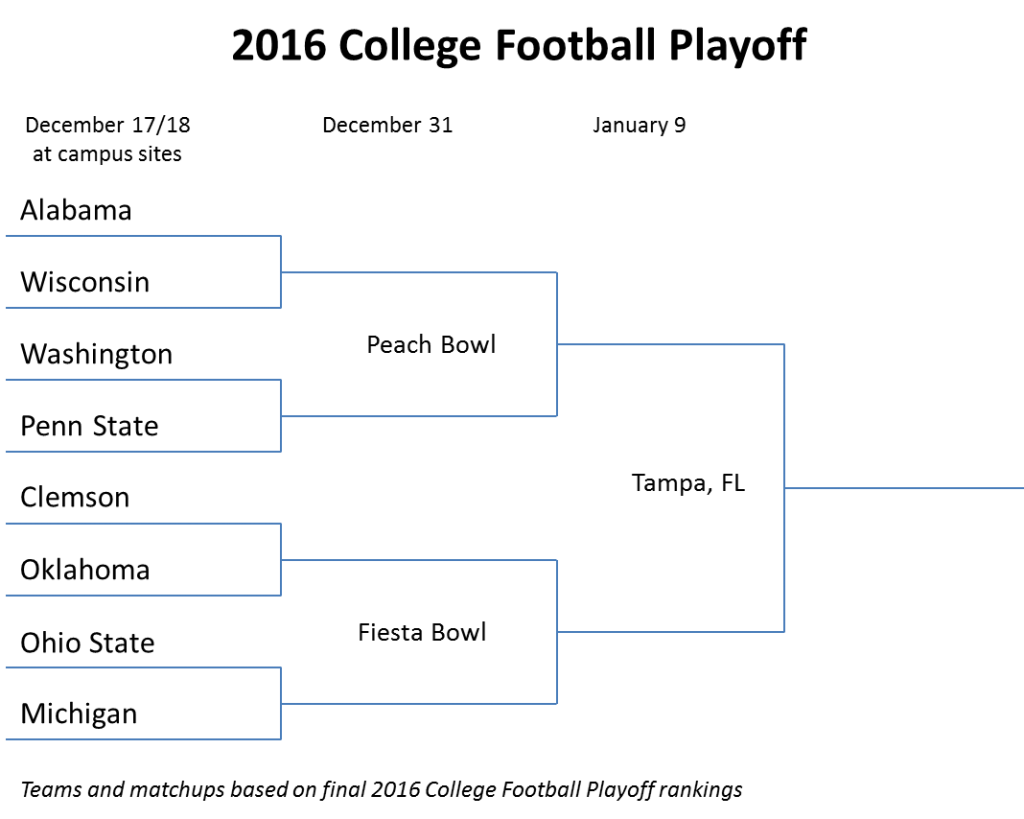 Let’s look at all the reasons why an 8-team playoff makes sense.

Reason #1 – Champions are determined on the field

While the committee does their best, and they’ve done an admirable job every year thus far, the participants in the college football playoff should be determined by results on the field. For starters, if you win your conference championship, then you’re in. This would settle 5 of the 8 spots. If you look at the top 8 teams in the final CFP rankings, all five conference champions are already represented. This won’t change much except to formalize the process.

Outside of central PA and the state of Wisconsin, did anyone really care about the B1G championship game? It was a foregone conclusion that Ohio State was in, and the only way Penn State or Wisconsin was going to make it was if Clemson lost. Even then, Virginia Tech, who would have been the ACC champion, would not have been in the playoff. Given these scenarios, what purpose do these games really serve? Let’s give the championships real meaning. The winner gets an automatic bid in the playoff. Teams will care and won’t want to leave their fate in the hands of a committee, nor should they.

Opponents of expanding the system say it will diminish the meaning of every game. They’re full of it. When the conference champion gets an automatic bid, every game will matter, especially the conference games. Even the non-conference games will have meaning. It will be important to have a solid resume if you’re one of those teams on the bubble hoping to earn one of the last three seats at the playoff table.

I love, and I mean absolutely love the idea of rewarding the top four seeded teams with a home game. On campus college games have a special atmosphere. On campus playoff games would be off the chart. I’m geeking out imagining a home playoff game for the University of Michigan at the Big House in sub-zero temperatures in mid-December. It would be epic!

Reason #5 – The group of five gets a chance

Once the field is expanded to eight teams, now the “other” schools will get a chance to participate. If a team like Boise State, Western Michigan, Cincinnati, or an independent like BYU has an epic season, there’s room to include them. I know the P5 guys hate this, but you have to give the little guy a chance if he earns it. Wouldn’t it be something if a Mountain West school like Boise State was able to bring home a true national championship?

When you look at the schedule I put together, the timing works perfectly. You would play the first round of playoff games at campus sites two weeks after championship weekend. The final four would be over New Years. Then the championship would be 10-14 days later. It gives the players a chance to recoup between games, and spaces things out nicely for TV. You could even schedule games Friday and Saturday during the first two rounds to avoid conflicts with the Sunday NFL games.

Opponents will complain that you’re extending the season, but it’s only one more game. The champion would have to play 16 games at most. If this is too many, then they should trim the regular season to 11 games. That extra game against an FCS opponent isn’t necessary. Otherwise, let them play it out. One more game is not that much more.

Reason #8 – There will still be plenty of controversy

Some claim that the controversy will go away if the conference championships determine the participants in the CFP. “What will we talk about” they bemoan. Well, that’s the beauty of 8. There are 3 at-large spots that the committee will get decide. There will always one, two, or more worthy teams that will get left out. That’s the way it is, and that’s the way it will always be. Furthermore, the committee would need to seed all eight teams. In other words, just because you win your conference championship does not guarantee a spot in the top 5. You have to earn that through play throughout the entire season.

So what’s the problem?

Right now, there’s only one reason it won’t happen. It’s not because it isn’t logical. I’ve just pointed out why it makes perfect sense. It’s because that’s what the current CFP powers-that-be have decided and what the networks are paying for. Simply put, the money isn’t there to add an extra game.

How the problem is solved

Bottom line, it’s a money problem. If the networks bring the money to the table, the CFP will change their tune immediately. And just look at that bracket. Those games would draw huge TV audiences. Power vs Power in Alabama-Wisconsin. East meets West in a classic Rose Bowl match-up with Washington and Penn State. Two explosive offenses in Clemson – Oklahoma. An OSU – Michigan rematch would draw a huge audience. Sponsors would line up. The networks would make a fortune. Why isn’t this happening????

For those who say that eight teams is a stepping stone to 16 teams, I disagree. Four games of this intensity are too much to play at this level. The sixteen teams that would be in the playoff would be more or less NFL caliber teams. Subjecting these “amateur” athletes (and I use that term very, very loosely) to that much physical punishment isn’t fair to them or the game. Not only does it risk the players health but it also risks the integrity of the playoff. There’s too great a chance that injuries would determine the champion rather than the talent on the field.

In the immortal words of TV father Tom Bradford (played by Dick Van Patten), eight is truly enough. Let’s not dilute the meaning of the playoff or the integrity of the games.

So it doesn’t matter what Mark wants, what the CFP wants, or what I want. If the people with money, which is the networks, want it, then it will happen. Here’s hoping they’re ready to start writing the checks sooner rather than later.