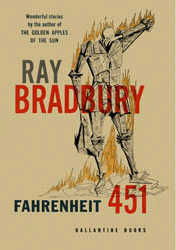 The story focuses on Montag – a fireman whose main focus isn’t to fight fires, but to start them. In order to control information and its dissemination, the government has banned books. Anyone found in possession of them is subject to having their house burned to the ground by the fire department.

Montag has become disillusioned with the societal distractions his wife engages in, which involves heavy doses of television and drugs. He becomes fascinated with the people who hide and defend the books he is ordered to destroy. As such, he begins secretly hoarding books from the houses he is sent to destroy, and therein lies the main plot line of the story.

I’ll admit the story is a classic, but I found it a tough read. Unlike Brave New World, which I found captivating and intense, Fahrenheit 451 felt like it went on forever before getting to the point. In other words, it felt like some of the assigned reading from my high school English classes.

While I can’t recommend reading this book, there was a valuable takeaway for me. Towards the end, Montag is befriended by individuals who have been labeled outcasts for their love of books and knowledge. Montag is speaking with one of them, named Granger, who says:

“Everyone must leave something behind when he dies, my grandfather said. A child or a book or a painting or a house or a wall built or a pair of shoes made. Or a garden planted. Something your hand touched some way so your soul has somewhere to go when you die, and when people look at that tree or that flower you planted, you’re there. It doesn’t matter what you do, he said, so long as you change something from the way it was before you touched it into something that’s like you after you take your hands away. The difference between the man who just cuts lawns and a real gardener is in the touching, he said. The lawn-cutter might just as well not have been there at all; the gardener will be there a lifetime.”

So while I found Bradbury’s work disappointing on the whole, the message in it is profound. That message is not to accept what we are told is right or wrong, or what we should do, but to have the courage to create our own way. Or, in the words of Granger, one should be a gardener rather than a lawn-cutter. The gardener will be remembered, the lawn-cutter won’t.