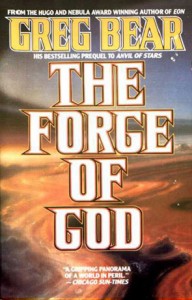 One of the books that was recommended through the engine was The Forge of God by Greg Bear. It was added to my list a couple of years ago, and then I bought it when it showed up on a Kindle Daily Deal. I figured that I should go ahead and read it this year since it had been sitting on my Kindle for quite some time.

By science fiction terms, The Forge of God could be considered a classic. It was written in 1987 and won the Nebula Award for best novel that year. The book is set in the mid-nineties, and the technology references in the book clearly date it. It’s pretty amazing how far ahead the technology has moved since the book was written.

The plot of the book describes an alien invasion of Earth with a devious twist. The invaders aren’t interested in occupying the planet, but destroying it. Throughout the book, the main characters work to identify the intent of the invaders, and then they are involved in a race against time to see if they can prevent the destruction of the planet.

For me, the action of the book was a bit slow. It reminded me a lot of a book I read a couple of years back, Forging Zero. In both cases, the books are very well written, but they are more about the development of the characters rather than the action. While many people enjoy this type of work, it was a tedious read for me. If you’re looking for a book with a lot of action and inventive science fiction, The Forge of God won’t fit that style. If you’re interested in a book with deep character development, then it will be right up your alley.

This time around, Amazon’s vaunted recommendation engine didn’t live up to its billing. Sure, The Forge of God is well done, and for its time, it was ahead of the curve. But unlike some other classic science fiction works such as Neuromancer, it has not held up over time. It’s an interesting read, but not one I would strongly recommend.

1 thought on “Book review – The Forge of God”