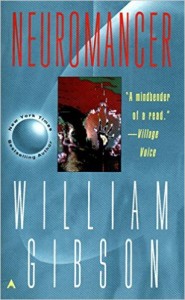 When I started my deep dive into sci-fi reading a couple of years back, a friend of mine, Andrew Schmitt, recommended that I read Neuromancer by William Gibson. While some shy away from a classic written 30 years ago, I looked at it as required reading if I wanted to really understand the genre. Plus, the book came highly recommended, which has become one of the key criteria in screening my extensive reading list that I’ve been stumbling through this year.

To say that Neuromancer is a classic sci-fi novel is an understatement. It really needs to be required reading for anyone venturing into the genre. In addition to coining the term “cyberspace”, there are many other themes that have been taken forward in other science fiction works. As I was reading the book, I could see how the book influenced classic science fiction movies like The Matrix. The themes present in other books are too numerous to mention.

Without getting into too much detail on the plot, the story centers around a young man named Case who made a living cruising through cyberspace as a thief for hire. His ability to jack into the net is compromised after he is caught skimming from one of his employers, and his desire to get back to cyberspace leads him on an adventure spanning both the real and virtual worlds.

As with many classics, Neuromancer is not always the easiest book to read. It requires all your attention as Gibson alternates between events in the real world and events occurring in cyberspace. There are also imaginative backdrops as you are taken from dystopian environments on Earth to science fiction, fantasy-like environments in space. It’s a book that engages both your imagination and your intellect as you immerse yourself in the settings that Case is navigating and negotiating his way around and through. It also challenges you to consider what lies ahead for humans as many of Gibson’s characters exhibit some form of machine augmentation. I found it both interesting and amazing as to the possibilities that Gibson envisioned, especially given that the book was written in 1984.

While it took a little bit of time for me to get my head around the story, it was worth it. After a little build-up at the beginning, the pace quickens, and Gibson keeps you on your toes throughout. I found both the characters and stories unique and unlike other books I’ve read lately. Whereas most books follow a predictable pattern with predictable characters, I found Neuromancer’s characters and story unique. It was a refreshing change and helped me enjoy the book even more.

Neuromancer clearly fits into my Must Read category of books. It’s required reading for anyone who is a science fiction fan. And if you are just starting out in science fiction, then move this one to the top of your list. Don’t wait two years like I did. You won’t be disappointed.