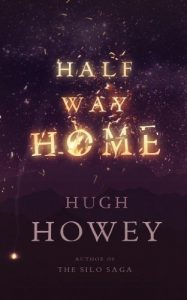 I’m a huge fan of Hugh Howey. I was introduced to his work through Wool, Shift and Dust (aka The Silo Series). I really enjoyed Sand, Beacon 23, and his short stories. One of my reading themes for the last year was to read more Hugh Howey. I was looking forward to Half Way Home when I saw it reach the top of my 2016 reading list.

Unfortunately, I walked away let down. Let me explain why.

Half Way Home is set on a distant non-descript planet. While not explained in detail, you learn through the story that the way we are colonizing planets is by sending zygotes into space, landing them on distant planets, and then growing the zygotes into people. While incubating, the developing humans are specialized while the artificial intelligent bot that is sent with them determines whether the planet is inhabitable and worth colonizing. If it is, the crew is spawned and begins setting up an outpost on the planet. If not, the group is unceremoniously terminated and wiped from existence.

In the case of Half Way Home, the group is woken 15 years early from their hibernation and partially terminated. Fifty or so people survive. The controlling AI determines the mission for the remaining group and puts them to work on a seemingly meaningless project. While some of the survivors do as their told, some begin to question what is happening. That is the basic premise of the book that Howey builds upon.

I didn’t find the story gripping, but the stories aren’t what draws me into Howey’s books. It’s the way he develops the characters and their surroundings. In his other works, I felt like I became immersed to the point of becoming a part of the story. I didn’t get there with Half Way Home.

There were too many characters that weren’t developed well enough for to make a deep enough connection to them. At times, it was even hard for me to discern and remember the relationships between them. I was also disappointed in the shallow development of the environment. I never got comfortable enough to feel like I was there, which was definitely the case in Wool, Sand and Beacon 23.

Bottom line, as much as I love Hugh Howey, I can’t recommend Half Way Home. However, to be clear, it doesn’t make me any less of a Hugh Howey fan. I still have an immense respect for his work. I have a number of his other books on my reading list and plan to keep them there. In fact, I’m looking forward to reading one or more of them during 2017.

Let’s just say that I’m giving Howey a pass on this one. It happens to all of us. So here’s what I’d recommend. If you’ve heard me, or someone else rave about his work, I’d suggest starting with The Silo Series made up of Wool, Shift, and Dust. I also liked Sand and Beacon 23, too. If you’re afraid of making a big commitment up front, then start with his short stories first. I really enjoyed The Plagiarist, Promises of London, The Box, and Glitch. After reading these, I’m certain you’ll be ready to make a commitment to one of his longer, more in-depth epics.