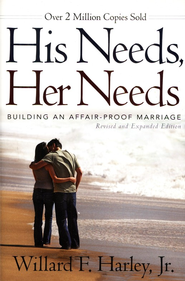 As I continue on my quest to read 25 books this year, I received another recommendation that was a diversion from my list of twenty. My wife, Lisa, asked me if I wanted to read the book His Needs, Her Needs: Building an Affair-Proof Marriage by William F. Harley, Jr. When I refused, she responded with “I read it, and I’d really like you to read it.” Being the wise man that I am, I decided to pick it up.

As it sounds in the title, the book is about building a stronger marriage, and more generally, stronger relationships with the opposite sex. Using insights he has learned through his practice of counseling married couples, mostly those in distress (typically from an affair), Harley identifies the ten basic needs of the average man and woman in a relationship. Furthermore, he breaks it down by identifying the top five for each sex, which, by chance, happen to be completely different for a man and a woman. Here’s how he breaks them down:

Top 5 needs for the average man in a relationship

Top 5 needs for the average woman in a relationship

The needs are fairly self-explanatory, so I won’t go into detail or breakdown each of them. If you’re interested in learning more about the needs, Harley devotes a chapter to each one, where he goes into more detail on each need.

Generally speaking, the points he makes are valid, but I don’t agree with all of his relationship recommendations. They aren’t directly applicable in my case, which is my biggest issue with the book. Since he is writing to a wide audience, the advice he provides is generalized, while the counseling for every relationship is unique based on the individuals in it and circumstances around it. Therefore, I find the advice he provides to be dangerous unless you are a trained psychologist or marriage counselor. In fact, I could see the book causing problems that didn’t exist in a relationship as one spouse forces advice from the book on the other, assuming that their needs must be the same as the “average” man or woman.

The book is written well and easy to read. However, I felt it was too generalized and stereotyped to be useful, at least in my case. I’m not sure that I would recommend it to people who are in a relationship, particularly one that is distressed, for fear that it would cause more harm than good. Instead, I would recommend that they seek professional help. On the other hand, I might recommend it to people who are not married or are contemplating a serious relationship as it will help one to understand the immense differences between a man and a woman and how much work it takes to build and be in a fulfilling relationship. In other words, it’s not all roses like you see on TV and in the movies.