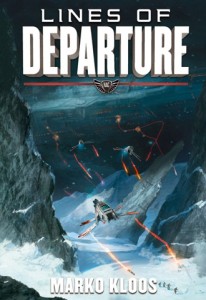 I’ve grown tired of reading book series and sequels. I don’t have enough time for reading or read fast enough to warrant the time investment. There are exceptions to this rule. Hugh Howey’s Silo Series, William Hertling’s Singularity Series, and A.G. Riddle’s Origin Mystery Trilogy are all Must Reads in my opinion.

One of my favorite books and recommended reads for 2014 was Terms of Enlistment by Marko Kloos. When I saw that he had released a follow-up, Lines of Departure, I decided to make another exception to my “no series rule.”

The story picks up around five years after the end of the first book. Andrew Grayson has advanced to the level of Staff Sergeant in the North American Commonwealth (NAC) and chosen to reenlist for another five years with his girlfriend Halley from the first book. The alien Lankeys have continued to expand their presence and are becoming increasingly aggressive at taking over colonized planets.

Grayson’s first mission in Lines of Departure is a hit-and-run attack on a Lankey settlement in an attempt to slow their progress. The action slows a bit from there as Grayson spends  time back on Earth, and then with his girlfriend Halley, before going on his next deployment. Kloos does a bit more character development in this installment than he did in Terms of Enlistment.

Upon his return to space, Grayson and his unit are sent on a mission to launch a surprise attack against the Sino-Russion Alliance. An unexpected encounter with the Lankeys cuts the mission short, and Grayson narrowly escapes with his life. After returning to base, he is reassigned to another unit and sent to a remote planetary settlement. The unit’s mission is to sit tight while the NAC leadership tries to figure out how to deal with the advancing alien Lankeys before they reach Earth. Of course, things go sideways during their remote mission, but I don’t want to spoil it. You’ll have to read it yourself to see how things turn out for Grayson and his comrades.

If you enjoyed Terms of Enlistment as much I did, then reading Lines of Departure is a no-brainer. It moves a little slower than the first book, particularly the time Grayson spends between missions, but there are strong action scenes around it. Kloos also weaves in quite a few of the significant characters from Terms of Enlistment in ways that add to the plot.

To be honest, I found Lines of Departure good, but not as compelling as Terms of Enlistment. I wouldn’t consider it one of my Must Reads. If you weren’t captivated by Terms of Enlistment, you may even want to pass on this sequel. I’m even unsure if I will read the next installment in the series, Angles of Attack. I’m not going to add it to my bulging reading list at this time, but I wouldn’t be surprised if it sneaks in sometime next year. It will most likely depend on what I hear about it and whether it brings the series to a logical conclusion. Given my “no series rule,” I’m not very interested in being drawn into a fourth book in this series.