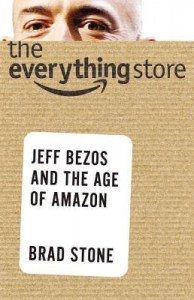 A few months ago, I discovered a new blog via Seth Godin called A Learning a Day. It’s a great blog to follow, and I particularly liked a recent post on the site titled Being Human. There was one particular passage that resonated with me:

In the really long run (i.e. generations later), almost no one will remember us or know we existed anyway. What really matters is that we live a life that means something to us and brings us happiness. There’s nobody else we really need to please. So, let’s be ourselves, and always remember… to be human.

The passage had more impact than normal since I had just watched The Men Who Built America and was in the middle of reading The Everything Store: Jeff Bezos and the Age of Amazon by Brad Stone. It’s a passage that applies to all of these entrepreneurs, or capitalists if you prefer that term. They all have (or had) a desire to live a life that means something and to build something that is greater than themselves. They want(ed) to leave their mark on the world.

So you can say what you like about Bezos. Some see him as a visionary, some as a genius, some as a control freak, and some as a maniac. You will find all of these descriptions by perusing the reviews of the book on Amazon. No matter what you may think, it doesn’t alter the fact that Bezos has built the largest and most successful retailer on the internet.

Stone does a great job reviewing the history of Amazon and Bezos’ role in creating it. No matter what some of the Amazon reviews may lead you to believe, Stone doesn’t make Bezos out to be a hero, dictator or villain. He does his best to present Bezos for what he is and let you make up your own minds regarding him.

After reading the book, I see Bezos as a man relentlessly driven by a vision, much in the same way as Vanderbilt, Rockefeller, Carnegie, JP Morgan and Ford are portrayed in The Men Who Built America. Bezos had a goal to build a store on the internet that would sell everything. He was passionate, relentless and persistent in his goal to make that happen. Along the way, he faced many challenges, both internal and external, but he fought his way through. He didn’t let anyone or anything get in his way. He figured out a way around the obstacles. In doing so, some of tactics were unorthodox, and some may have ruffled a few feathers, but in his mind, he did what it took to realize his vision.

It’s also evident from the book, and from people I’ve known who have worked at Amazon, that he has crafted a very grueling environment within the company. He strives to hire the best, and then demands that they perform at the highest level possible. For some, it’s an environment and atmosphere that they thrive in. For others, it’s cruel and demeaning. In my opinion, it’s Bezos way of making sure he was working with the best. As one quote in the book stated:

If you’re not good, Jeff will chew you up and spit you out. And if you’re good, he will jump on your back and ride you into the ground.

Thinking small is a self-fulfilling prophecy. Leaders create and communicate a bold direction that inspires results. They think differently and look around corners for ways to serve customers.

If I had one critique regarding the book, it’s that it does not follow a clear timeline. Stone has a narrative that he wants to tell, so he takes liberties with the linearity of time. In other words, Stone moves and back-and-forth freely in time when describing different events. It doesn’t take away from the overall story, but it does make it hard to follow in spots.

I highly recommend The Everything Store. It’s a great book and reinforces my belief that the best business books are stories written by outside sources, much like Hatching Twitter. It has me looking forward to some other business biographies that are on my 2015 reading list.

6 thoughts on “Book review: The Everything Store – Jeff Bezos and the Age of Amazon”