For some reason, I can still remember the moment clearly. I was in my late twenties. I had just moved into a marketing role. I was at a breakfast meeting with our sales team at the beginning of multi-city road trip in Dallas. The question came: “Would you like a cup of coffee?” I replied quickly, “No, I don’t drink coffee.” I received an incredulous look. The response, “You will. You can’t survive on the road without it.”

I had tried coffee before but didn’t like it. I couldn’t get over the taste. I was also concerned I would turn into one of the “coffee zombies” I saw around the office. They couldn’t start their day without woofing down two cups, and then needed three or four more cups to get through the rest of their day. I didn’t want to be one of them.

I made it a point to stay away from coffee. To fit in with the coffee drinkers, I made tea my drink of choice. It worked. Even with the proliferation of Starbucks, I stuck with teas – either straight up or as a tea latte. Life was good.

But Starbucks has a way of wearing you down. About five years ago, I finally gave in and decided to try a caramel frappuccino while waiting on a meeting. One frappuccino led to another, which then led to a macchiato, which then led to lattes. Before I knew it, having an occasional espresso drink at Starbucks was a treat, something I enjoyed. I was hooked, even though I still didn’t like the taste of straight coffee.

I should have know that drinking coffee would be a matter of when, not if. That day arrived when my parents bought a Keurig machine for my office about 18 months ago. It didn’t seem right to just let the machine sit there, so I started to explore coffee. To my surprise, I discovered that there are significant differences in coffee. Much like there are good wines and bad wines, there are good coffees and bad coffees. Plus, they are all dependent on your own individual taste. In other words, I may love a certain coffee while you may find it absolutely disgusting. When it comes to coffee, the phrase “to each his own” applies. 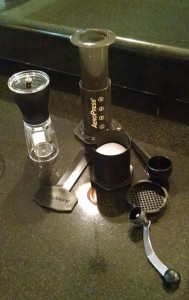 Even though I enjoyed the Keurig machine, I was told that the best coffee was fresh ground and fresh brewed. I wanted to explore it, but the process and expense of buying a grinder and a true brewer just seemed to expensive. Then, over this past summer, I happened across an article about a simple, inexpensive contraption called the Aeropress. Supposedly, you could easily create coffee concentrate for an espresso, latte or americano. Again, I resisted the urge to buy it, and I was successful for many months, until this past Christmas.

Lisa usually gets gift cards for Christmas, but this year she received a small bag of coffee beans. I discovered that I could buy a small hand grinder and the Aeropress for about $65, so I figured it was worth a try. Between Christmas and New Years, I received the goods and set out to make my first fresh ground cup of coffee.

Turns out, it was just as easy as advertised. The grinding took a little bit of effort, but it wasn’t extremely difficult to grind the beans required for one cup. The process of making the coffee through the Aeropress was even easier. Simply put the ground beans in the Aeropress, add water, stir, plunge for 20-30 seconds, add a little water, and presto -fresh Americano.

What really shocked me was the difference in taste. The freshly ground, freshly brewed coffee definitely had a higher quality taste than any coffee I’d had previously. In retrospect, it shouldn’t be a surprise. After all, coffee is simply water and beans. If these two ingredients are high quality, there’s a good chance that the coffee will be too.

Overall, I was surprised by how easy and inexpensive it was to create your own coffee from freshly ground beans. I was also blown away by the difference in taste. It’s not something I expect I’ll do every day, but I do expect it’s something I will make once a week or so.

So the sales team was right. I did start drinking coffee. It may have taken a while, but I caved. Of course, my biggest mistake was buying the Aeropress. Now that I know how good coffee can be, I’m hooked. It makes me wonder, what have I done?

2 thoughts on “The dependency begins”