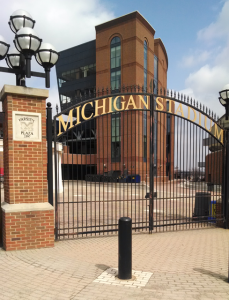 I had a chance to visit The Big House in Ann Arbor recently. I was visiting colleges with my son, Brad, and couldn’t resist checking it out since it was my first time in the area. To say I was blown away is an understatement. It’s a mammoth structure that is nice, really nice. It’s puts most professional stadiums I’ve been in to shame. As Brad and I walked around the outside of the facility, I couldn’t help but think about all of the noise about college athletics and whether or not the athletes should be paid. After seeing the sight of the Big House, it hit me. Universities have lost touch with their core mission.


Show me the money

During our walk, Brad and I did a quick calculation of how much money the University of Michigan grosses during a football season. Using round numbers, we figured there are about 100,000 paying fans for each game at an average ticket price of $80. That’s $8,000,000 brought in for one game. Assuming there are 7 home games in a season, that’s $56,000,000 that the University generates in ticket sales. On top of that, there are probably 10,000 seats in the stadium that require a donation to the athletic department that averages $10,000 per seat. That’s an additional $100,000,000 in revenue for the University. They generate $156,000,000 before adding in the revenue for broadcasting rights and contracts, sponsors, concessions, and apparel sales. I wouldn’t be surprised if the football program generates $250M-$300M in total revenue for the University when all is said and done.

Are colleges in the entertainment or education business?

Sports is an entertainment business. Everyone involved in the game, coaches, players and officials, are there to entertain the fans. When colleges are pouring money into athletic programs and facilities, creating their own television networks, and paying coaches millions of dollars, they are no longer in the business of education, they are in the business of entertainment. Given the amount of money these programs generate, it would only seem fair that the players should be paid. I disagree.

Paying college players will push the colleges further into the entertainment business. Once you start paying the athletes, it’s only a matter of time before colleges start bidding for players and driving the costs to run these programs higher. At that point, colleges aren’t running athletic departments, they’re running professional sports franchises. It becomes a distraction to their core mission, which is to educate students, not to field farm teams and develop talent for the NBA and NFL.

Is there an alternative?

Instead of paying the college athletes, the NFL and NBA need to adopt the model used by Major League Baseball. They need to create a farm system that offers a path to athletes who want to focus on becoming professionals. It would drop the charade of the student-athlete and allow these young men the opportunity to earn a fair market wage for their services while perfecting their craft.

Under the current system, the student-athletes who would prefer to be practicing their craft, be it basketball or football, are placed in an environment with artificial limits. There are limits on how much they can practice, eat or get coached, and who they can interact with. The limits do not help these students excel at their craft. They are there to make it look as though the colleges are concerned about the welfare of the student-athletes.

Putting the athletes in a situation where they have to spend 1, 2 or 3 years in the university system before turning pro is a collusive system. It forces the athletes to provide their services to the college for “free” in exchange for an opportunity to go pro. If an eighteen year-old was forced to work somewhere for free before they could get paid in an industry, fair labor boards nationwide would have a field day taking employers to task.

A matter of time

The current college athletics system has gotten too big for its own good. Given the amount of money involved, people are going to demand their fair share. The Ed O’Bannon lawsuit and the union vote by the Northwestern players are just the first wave of challenges that are coming in. There will be more, and each wave will be greater until one finally breaks through the facade that the NCAA and its membership institutions are hiding behind. When they are finally exposed, I can only hope it will lead the institutions back to focusing on what they were built for – the business of education.